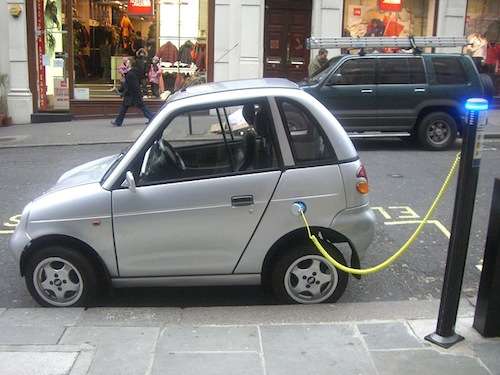 The bizarre incident occurred this past Tuesday in Sweden.
Advertisement

Not even Hollywood could have scripted a story as strange as this. Last Tuesday, a toy gun-toting 9-year-old stole a parked car in Gothenburg, Sweden. The youngster began his crime by frightening countless onlookers by pointing the gun screaming, “It’s loaded.” Though just an airsoft gun, the boy fooled pedestrians from the onset. The unchallenged boy first attempted to break into a parked car near a group of flats, but quickly abandoned his plan. The young man then attempted to steal another car parked nearby. The boy was successful in his second attempt and sped off in the car, narrowly avoiding running over a gardener working in the area.

Unfortunately for the little criminal, he decided to steal an environmentally friendly, but extremely slow electric vehicle, which has a top speed of just 18 miles per hour. Not surprisingly, the electric car impeded any of the boy’s chances of a quick escape. At this point, several concerned citizens decided to partake in a not so high-speed chase. The pursuit lasted for about 10 minutes, ending with the boy crashing at a roundabout. The child then decided to take off on foot, but was soon corralled by an adult.

“It’s unbelievable,” said Jan Jentzell of the Poseidon Property Group, which owned the car. “I’ve never seen anything like it. It’s all so tragic…he’s so young,” added Jentzell, according to a Swedish newspaper.

Despite the nature of the crime, the youngster is too young to face criminal charges. He is currently in the custody of social services, which will decide the course of action.

For those interested in the make and model of the electric car, it has not been disclosed in any of the reports.

The shocking story comes just days after a similar incident was reported in Albuquerque, N.M. Unlike the Nordic boy; the 11-year-old Albuquerque boy’s crime was caught on tape. As for his fate, he and his underage cohorts are currently facing criminal charges in juvenile court. Video of the child’s crime can be viewed HERE.

Image: Wikipedia (image is just an example of an electric car and does not represent the vehicle in the article)

Tsingshan's Threat to Tesla: EV Maker Is In Battery Crosshairs
Tesla-Funded Research Reveals One of The Biggest Mysteries of EV Battery
END_OF_DOCUMENT_TOKEN_TO_BE_REPLACED