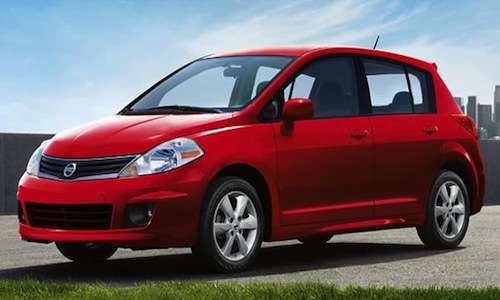 Sales of smaller, more fuel-efficient vehicles are on the rise in U.S. according to a new J.D. Power and Associates report. The study points to the fact that compact car sales are markedly up in the first two months of 2012 compared to last year. Aside from sales, the J.D. Power report also tabulated the average time that compact cars spend on retailer lots before being sold. The news is not entirely surprising due to a rising price at the pump and the increasing desire amongst consumers for vehicles with better gas mileage.

Leading the subcompact conventional vehicle category was the Nissan Versa, which spent an average of just 36 days on dealer lots prior to being sold. To put this in perspective, the Versa spent roughly 92 days on dealer lots during the same period in 2011. Not to be outdone, the Honda Civic led compact convention models, averaging 42 days before being sold. The 42-day period bested last year’s average by 24 days.

As for sales, both the subcompact and compact car categories posted impressive market gains. Combined sales (retail and fleet) indicate that the small vehicle category (subcompact and compact) currently make up nearly one-fifth of the U.S. automotive deliveries, a one percent increase compared to 2011. In total, subcompact vehicle deliveries have risen 37.7 percent, selling 88,223 units so far in 2012. Compact model sales have sold an impressive 317,852 vehicles, a 13.3 percent increase. Despite the sharp rise small vehicle sales, the midsize segment remains most popular amongst American buyers.

Additionally, J.D. Power and Associates' (Power Information Network) PIN data found that segment loyalty has bolstered sales. Nearly 24 percent of subcompact owners traded in their vehicles for another sub-compact car, which is up 5 percent from last year. Likewise, approximately 40 percent of compact vehicle owners traded in their vehicle for another compact car model.

According to U.S. News, a leader in car rankings, the three most popular affordable small cars in 2012 are the Honda Fit, Ford Fiesta and Ford Focus. The 2012 Honda Fit also earned the top spot in U.S. News’ Subcompact car category.

The current price of regular unleaded gas as of Tuesday, March 21 is $3.86 per gallon, according to AAA’s Daily Fuel Gauge Report. In California, the average price is $4.35 per gallon.

Tesla Giga Berlin's New Hurdle: It's Not Only the Gov't, but Now Tesla Itself
Teslas Are Sold Out Until 2023, But The Timing May Reverse
END_OF_DOCUMENT_TOKEN_TO_BE_REPLACED