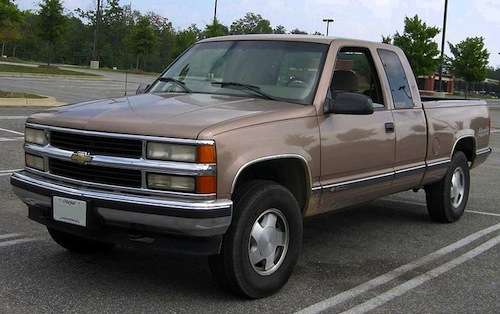 Man receives ticket after being run over by his own truck

The victim Brian Reynolds was issued a ticket for operating a vehicle with defective equipment after his brakes failed, which resulted in him being run over by his own Chevy pickup truck.
Advertisement

In what seems like a scene out of The Flintstones, a Massachusetts man was run over by his own truck earlier this week after attempting to slow down his rolling truck by using his foot. As if being rolled over by a pickup truck was not bad enough, Brian Reynolds, a Lynn resident, was issued a ticket for operating a motor vehicle with defective equipment shortly after the accident, according to Salem Patch.

The incident occurred in Salem on Monday while Reynolds was attempting to drive his Chevy pickup truck near the entrance of Mack Park, a recreation area and playground. Unfortunately for the Lynn native, his truck’s brakes failed, sending the vehicle careening down Tremont Street.

Reynolds then opened the driver’s side door and attempted to slow down the truck with his foot. Not surprisingly, Reynolds’s idea did not work and subsequently led to him falling out of the vehicle. The driverless truck then ran over Reynold’s left leg. The runaway Chevy continued rolling down Tremont Street and eventually crashed into a fire hydrant.

To make matters worse, responding officers gave Reynolds a citation after finding the driver face-down in the street. Reynolds was then taken to the North Shore Medical Center. Police indicate that he did not sustain any life-threatening injuries.

Reports do not state whether Reynolds had the wherewithal to employ any of the proper techniques to stop a car with no brakes. In the event of sudden brake loss drivers can pump the brakes several times in order to rebuild pressure in the brake system. If this is unsuccessful, drivers should shift the vehicle into a lower gear to slow the vehicle. Lastly, employing the emergency brake can usually stop a vehicle.

Through uncommon, individuals do get run over by their own cars. Just over a month ago, a New York man named Paul Pattison was run over by his Jeep SUV while attempting to jumpstart the vehicle. Prior to the accident, Pattison had crawled underneath his vehicle in an attempt to fix it. Unfortunately for Pattison, he neglected to put his SUV in park.

In September, an 86-year-old woman was killed after she was run over by her own vehicle while in a church parking lot. The victim Marie Surowics, apparently forgot to put the vehicle in park, sending her car drifting backward and running her over.

A similar incident occurred in August when the wife of former U.S. Rep. Lee Hamilton died after being run over by her own vehicle. Nancy Hamilton, 82, was killed after her vehicle rolled over her after neglecting to shift it into park.