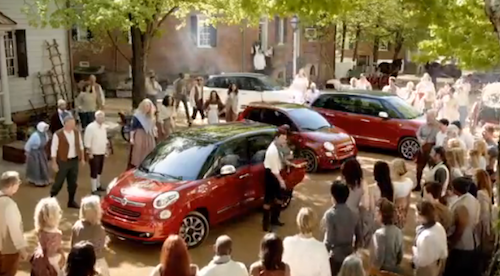 A new ad for 2014 Fiat 500L asks the question: What if the Italians had invaded instead of the British?
Advertisement

Have you ever wondered how the course of American history might have changed if the Italians had invaded instead of the British? Well, the latest ad for the all-new 2014 Fiat 500L answers this query in amusing fashion.

The creative ad spot begins by revisiting Paul Revere’s famous Midnight Ride where he famously uttered, “The British are coming!” – a phrase that he never actually shouted, but that’s beside the point. This time around, Revere is warning his fellow citizens that the Italians are coming.

Although the Battles of Lexington and Concord followed the 1775 British invasion, the Italian invasion depicted in the ad brings nothing but joy to the residents. In fact, tea cups are traded out for espresso cups, pubs turn into clubs, and women ditch their conservative garb in favor of more provocative attire. One woman even says, “This is going to be so much better than the tea party.”

As for what’s under the hood, all 500L models are equipped with a turbocharged 1.4-liter 4-cylinder engine that produces 160 horsepower and 184 lb-ft of torque. It’s available in three transmission choices: a 6-speed manual, 6-speed twin-clutch automated manual and a traditional 6-speed automatic.

Not to mention, the Fiat 500L can also be customized to include an in-vehicle espresso machine that uses Lavazza Espresso Pods. It is the world’s first production car to contain such an amenity.

The 500L is available in four trims – including the Pop (Base) model, Easy model, Trekking model, and Lounge model. The Base model starts at $19,900, while the top of the line Lounge model is available for $24,995.

As a first year promotion, Fiat is offering its Premiere Package at no extra cost on all models except the Pop. The package, which typically cost $1,700, includes a navigation system, 6.5-inch touchscreen display, rear backup camera, and rear-park assist. The Fiat 500L is set to hit dealerships by the end of this month.