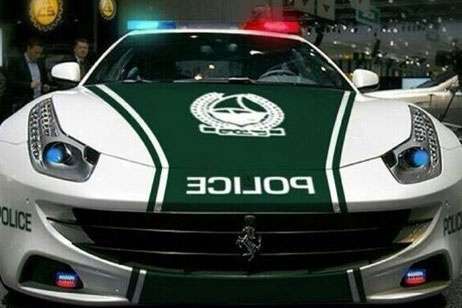 Dubai Police force adds a Ferrari FF to its arsenal

The impressive Dubai Police fleet now consists of a Ferrari FF, a Lamborghini Aventador and a Chevy Camaro SS.
Advertisement

Criminals in the United Arab Emirates are in for a rude awakening because the Dubai Police force has just added an Italian supercar to its repertoire.

Photos published by the online newspaper Emirates 24/7 show the FF, which features green and white decals like the rest of the Dubai Police force’s fleet. Click here to view photos.

So what does the new Ferrari bring to the Dubai Police force? For starters, the vehicle boasts a 6.3-liter V12 engine, which produces approximately 651 horsepower. Dubbed the world’s fastest four-seat automobile, the FF has a top speed of 208 mph and can travel from zero to 62 mph in a mere 3.7 seconds. As for the transmission, the FF is equipped with a 7-speed double-clutch semi automatic paddle shift system similar to other Ferrari models like the California, 458 Italia and the F12 Berlinetta.

Not your typical supercar, this FF was specifically designed according to Dubai Police specifications to “help facilitate policing on highways," according to officials. Authorities plan to have its new Ferrari FF patrol through tourist zones throughout Dubai.

News of the $250,000 Ferrari FF patrol car comes just one week after Dubai Police authorities confirmed the addition of another Italian supercar, a $550,000 Lamborghini Aventador. Like the Ferrari announcement, news of the Aventador was made through the force’s twitter feed, @DubaiPoliceHQ, resulting in rush of tweets containing the hashtag #OnlyinDubai.

Similar to the FF, the Lamborghini Aventador features a 6.5-liter V12 engine that produces 690 horsepower. The Aventador touts a top speed of 217 mph and can go from zero to 62 mph in just 2.9 seconds. The two-door supercar also contains a single-clutch seven speed semi-automatic transmission.

Although police officials may have improved upon its performance, the top-of-the-line Camaro coupe comes with a 6.2-liter V8 engine and a standard 6-speed transmission, offering 426 horsepower and 420 lb.-ft. of torque. The Camaro SS retails in Dubai for around $40,000.