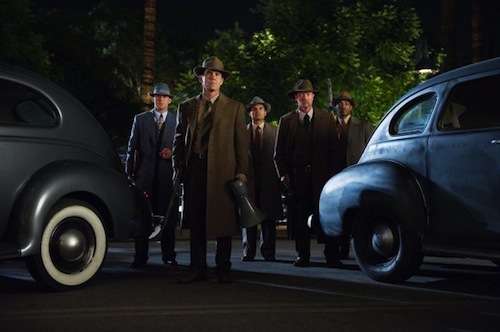 Classic car enthusiasts will be for a real treat this weekend with the debut of the new crime flick Gangster Squad. Aside from boasting an all-star cast, Gangster Squad features over 100 vintage vehicles, many of which are one of a kind.
Advertisement

Although the new movie Gangster Squad touts an impressive cast, it can be argued that the true stars of this period piece are its vintage cars. Aside from acting heavyweights like Ryan Gosling, Josh Brolin and Sean Penn, Gangster Squad features over 100 classic cars, the majority of which are irreplaceable.

Not only do these rare cars light up the screen, they also add a sense of legitimacy to Gangster Squad that could not be achieved otherwise.

“These cars, they’re as important as the buildings and clothing and makeup in establishing the time and place,” said Leslie Kendall, chief curator of the Petersen Automotive Museum in Los Angeles, which is currently displaying three cars from Gangster Squad. “If you want to lock a movie scene in, use the right car and they will immediately get it.”

In order to achieve the most authentic look possible, picture car coordinator Tim Woods spent three months working with the film’s director Ruben Fleischer choosing the most suitable vehicles. Woods donated several cars from his personal collection to the film, while the remainder came from Southern California car collectors. In some cases, the owners of the donated cars drove their personal vehicles during filming.

“It’s always good to have the owner of the vehicle to drive the car, because it’s their baby,” said Woods, whose 1941 Ford Deluxe Convertible, 1947 Ford sedan and 1946 Chevy pickup play roles in Gangster Squad.

Not surprisingly, several cars in the film had to be destroyed. Woods, as the picture car coordinator, had to wreck four classic 1949 Cadillacs and eight other vintage cars. Luckily, for the film’s classic car lenders, all of the wrecked vehicles came from local junkyards. Woods and his team purchase vehicles at junkyards that do not run then customize them for stunts and ultimately destroy them.

As for the loaned classic cars, not one was harmed during filming. All bullet holes were CG said Woods, who was dead set on maintaining the integrity of the cars. There was one accident, however, which involved a classic vehicle colliding with a 2010 Ford taxi in the middle of the night.