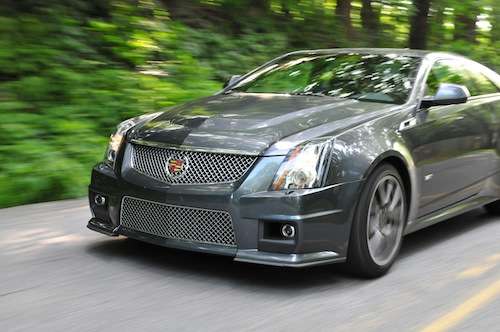 Every “good” bad guy needs an equally sinister ride. Whether it’s the 1970 black Chevy Nova in Death Proof or the 1968 Dodge Charger featured in Bullitt, a memorable car makes for a memorable villain. With that in mind, the folks behind the new film Alex Cross are hoping that their villain’s vehicle of choice may one day enter the pantheon of great “bad guy cars.”

The film, which opens Friday, tells the story of Alex Cross (Tyler Perry), a homicide detective and psychologist who is on the hunt for a serial killer named Picasso (Matthew Fox). Despite being mentally unhinged, Picasso still makes wise decisions when choosing his vehicle. In fact, Fox’s character drives a Cadillac CTS-V performance car.

Having trouble picturing a high-end luxury vehicle being driven by a crazed madman? Fox, seems to think that Cadillac may have a difficult time coming to terms with it as well. “I don’t know if they are happy with the guy driving the car,” joked Fox to USA TODAY. “I would be surprised.”

As for Fox, he believes the vehicle suits his character’s persona. “I like the choice; it was good,” said Fox. “It was just stealth enough, sexy enough and fast enough. But at the same time it didn’t stand out too much. It’s under the radar enough.”

Rob Cohen, the movie’s director, played a major role in choosing Fox’s vehicle. Cohen, who directed The Fast and the Furious, insisted on using GM vehicles since Alex Cross was shot in Detroit.

No stranger to the entertainment world, the Cadillac CTS-V has been featured in numerous movies and TV shows since its inception. Not only was it prominently featured in films like Mr. and Mrs. Smith (2005) and Jack and Jill (2011), it has also popped up in shows like Criminal Minds, Dallas, CSI: Miami and Necessary Roughness.

Introduced in 2004, the Cadillac CTS-V is the high-performance version of the standard Cadillac CTS. It touts a pushrod V-8 OHV engine and a sport-tuned suspension. The CTS-V is currently available in sedan, coupe and sport wagon. The vehicle’s main competitors are the Audi RS6, Mercedes E63 AMG and BMW M5.

True to its high-performance moniker, the CTS-V is currently raced in the SCCA World Challenge. It originally competed as a sedan from 2004-2007 and has competed as a coupe since 2011.

Check out Alex Cross when it hits theaters on Friday, October 19, 2012.