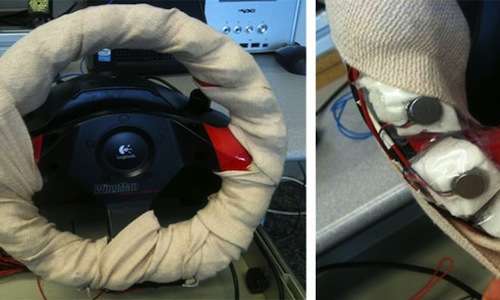 Vibrating steering wheel could help drivers navigate the road, while avoiding the distractions associated with a typical GPS.
Advertisement

With the rise of distracted driving in mind, AT&T Labs and Carnegie Mellon University have just developed a new and innovative GPS-enabled steering wheel with haptic technology. For those unfamiliar with haptic technology, it is a tactile feedback system that employs the use of vibrations. Whether they know it or not, every cell phone owner utilizes haptics on a daily basis via their phone’s vibration system. Specifically, AT&T’s new steering wheel prototype utilizes vibrations to alert drivers when to turn the wheel. Unlike a typical GPS system that averts the driver’s eyes from the road, the haptic system alerts drivers of upcoming maneuvers via vibrations, which does not require looking away from the road.

Though still in the prototype stage, AT&T Labs has released detailed information on how the product operates. The steering wheel is synced with a GPS-enabled computer system and contains over 20 motors that deliver vibrations to the driver’s hands. So how exactly do the vibrations work? Well, the vibrations operate in a pattern system: clockwise for right turns and counter-clockwise for left turns. Additionally, vibrations will escalate when drivers approach intersections. The wheel’s haptic system takes the place of the old GPS standard of receiving vocal instructions. Kevin A. Li, AT&T Labs researcher described the process to CNN by stating, “Drivers get this intuitive sense of which way to turn. Users don’t really have to think about it. They just get it.”

Li, along with his fellow researches spent roughly a year creating the prototype. It was developed with drivers of all ages in mind, but researchers believe the wheel will be particularly helpful to elderly drivers. The elderly, along with technologically impaired drivers of any age will benefit from steering wheel vibrations opposed to typical unclear and confusing GPS instructions.

Furthermore, a study at Carnegie Mellon’s Human-Computer Interaction Institute found that haptic steering wheels increase driver attentiveness. Most notably, the vibrating steering wheel increased the attentiveness of young drivers by 9 percent. Unfortunately for AT&T labs, the study also discovered that the prototype was ineffective in reducing way-finding errors. The complete study will be published in June according to Carnegie Mellon.

The prototype marks the first time haptic technology has ever been embedded into a steering wheel for the purpose of navigation. That said, automakers like Audi, BMW and Mercedes-Benz have used vibrating steering wheels in the past for both lane departure purposes and to notify drivers when they are veering out of their lane.