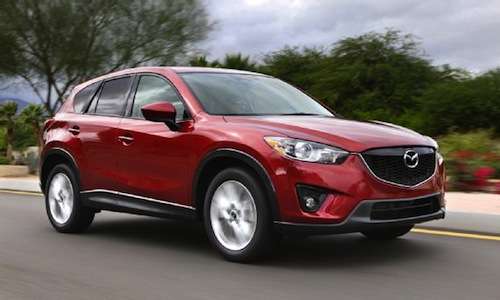 "The Mazda CX-5 is in a class all its own," said John Abel, MNAO director of marketing. "We take the same enthusiasm and 'no compromises' approach used in engineering our vehicles and apply it to our marketing efforts. Our 'Better. Stronger. Smarter.' campaign reinforces the fact that Mazda builds cars that are worth driving and continues to beg the question 'What do you drive?'"

The commercial be run nationally in both a 60-second and 30-second version stating Wednesday, March 28. Aside from television ads, Mazda will also soon begin a “Better. Stronger. Smarter” social media campaign, which includes Facebook, Twitter and YouTube channels. In addition to TV and social media, Mazda’s new ad promotion will also feature cinema, print, digital (mobile and video) and place-based video in health clubs, airports and other locations. The multi-pronged approach is designed to target a broad consumer base even when they’re not in front of the television.

"We felt it was important to create a marketing campaign that speaks to the uniqueness of the Mazda CX-5. The emphasis on science and technology throughout the campaign helps us tell the story to consumers in a different but relatable way. Essentially it's science fiction without the fiction."

The new CX-5 ad launch comes one month after Mazda partnered with the hit children’s film Dr. Seuss’ The Lorax. Mazda’s “Seuss-ified” ads attempted to link the automaker’s Skyactiv technology with the environmental message of The Lorax. The TV spot received mix results from critics and even resulted in an online petition to remove the ads. Rethinking The Automobile, petition starter, argued that Mazda’s ad campaign was a “crass commercialization” of the Seuss’ popular children’s tale.

The 2013 Mazda CX-5 is a compact crossover SUV aimed at the family-oriented demographic. It is the first Mazda model to feature Skyactiv technology, which combines a more efficient transmission and engine in a platform designed to create a more environmentally friendly vehicle. Available in both front-wheel and all-wheel drive, the CX-5 boasts a 2.0-liter engine and a six-speed transmission. The CX-5 also touts a notable fuel economy of 26-mpg city and 35-mpg highway. The 2013 CX-5 has a starting MSRP of $20,695.