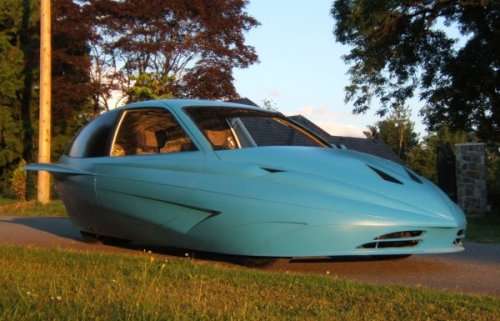 The Zoleco aerodynamic car gets 91mpg without electrification

Built in a home shop by an enthusiast, the aero car gets 91 miles per gallon without being a hybrid, using only gasoline and extremely well-engineered shaping for this awesome home project gone extreme.
Advertisement

Most of us spend our weekends fishing, watching the game, or surfing the Internet. Not Zoltan Bod, a Canadian tinkerer who is a self-described "performance nut." He builds and restores cars. One day, he got the idea that maybe he could build an ultra-efficient car without going electric.

Using his own ingenuity, a lot of design skill, and his own home workshop, he did just that. Introducing the Zoleco, an aerodynamic 3-wheeler that seats four and gets 91 miles to the gallon without sacrificing style.

The Zoleco gets its moniker as a combination of Zoltan's unusual name combined with "ecological." It's an awesome design study in drag efficiency and the use of a minimal powertrain in a car that is fitting for everyday use.

Recently, TorqueNews got the chance to interview Bod and find out the story behind this new concept. The initial prototype, shown here, started as an idea on a piece of paper and grew into its current form over the space of several months. The attached photo gallery, courtesy of the Zoleco website, shows the progression from bare frame to ready-to-show product. The car has appeared in shows local to its creator and Zoltan hopes to take it on a short tour of the U.S. to be showcased at several shows here.

But that won't happen until after the car has been proven on the Bonneville Salt Flats. "When my next round of funding is acquired (looking for investors) we will be building the proof of concept as a Bonneville Salt Flats race car," says Zoltan. "We have coined the venture the 150mph/150mpg Challenge. I believe the salt dyno is the perfect place to prove the design architecture of this car."

The Zoleco is a 3-wheeled car built on a custom frame and utilizing a tiny, turbocharged 3-cylinder engine putting out 80 horsepower into its 5-speed manual transmission. With 50% less drag than the equivalent car (in size), the little teardrop-shaped Zoleco uses 82% less fuel than a comparable four-wheeled counterpart, Bod says.

Those numbers are very impressive and add up to a 91mpg rating on a car with an estimated drag coefficient of only 0.16. For comparison, the Toyota Prius (current generation Liftback) has a Cd of 0.25. The Zoleco's drag would be comparable to the X-Prize winning Li-ion Motors Wave II and Edison2 VLC.

When asked about stability issues, he answered with a simple answer: "wide track, low center of gravity, good weight distribution, good anti-sway bars.. you have a car that can cut corners nearly as well as the best handling square cars." In my question about the 3-wheel design and stability, I had mentioned the Aptera, which famously (and repeatedly) failed the X-Prize competition's 45mph highway obstacle avoidance safety test. Zoltan says that this was due to the car's bad engineering. Other analysts agree, stating that the 3-wheeled Aptera design was top-heavy due to its narrow track.

I talked about visibility, since the Zoleco has no side mirrors, and Bod informed me that my assumption about the blacked out areas in the rear being future windows was correct. This, with only a simple rear-view mirror inside the car, would prove to provide a huge amount of visibility. You can see in the design that the pillars are stretched rearward, giving a large window area to either side. "Sitting in the drivers seat for example when you look over your shoulder either way [and] all you see is window," says Zoltan.

Once the Bonneville run is complete, the Zoleco will begin a tour of shows in the Western U.S. Starting with SEMA in Las Vegas and moving on to the Barrett Jackson Auction in Arizona, where Bod envisions putting a few on the block to try to drum up interest.

For someone working only in his shop in his spare time, Zoltan Bod has come up with something unique. The Zoleco is a real-world car built to use current, easily-accessible technology to maximize efficiency without sacrificing looks or versatility.