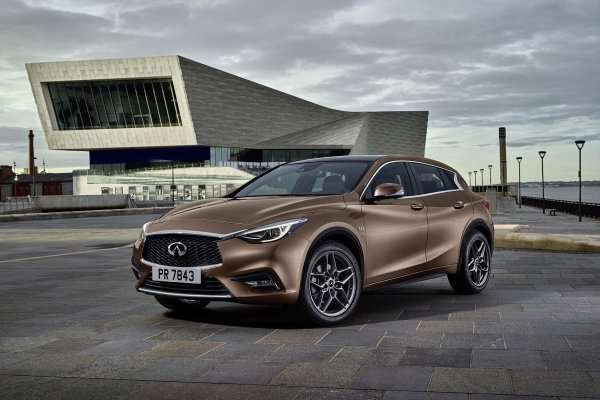 Details on the all-new Infiniti Q30 compact crossover for the North American market have been released. Think turbocharged with a manual transmission option.
Advertisement

The Infiniti Q30 is the latest from Nissan's luxury brand. Unveiled in Frankfurt this week, the Q30 is a premium compact crossover meant to compete in the fastest-growing segment of luxury automotive. We found some details on the Q30 that show us who it's competing against, exactly, and how well it will likely do.

When the new Infiniti Q30 unveiled earlier this week, we saw that the premium brand is not sitting on its laurels watching the newest segment go by. Instead, Infiniti has jumped into the luxury compact crossover segment with both feet, unveiling the production-ready Q30.

The European model will have several engine choices to include a gasoline and two diesel options. Top horsepower output will be 168 hp in those drivetrain choices. For the U.S., though, those aren't even getting started.

The North American version of the Infiniti Q30 will be powered by a 2.0-liter turbocharged engine as its only option. This little powerplant produces 208 horsepower and will be available in both a six-speed manual transmission or a seven-speed dual-clutch automated transmission.

These options create a big surprise for buyers in the U.S. and show that the Q30 will be singularly sport-focused, competing with the BMW X3 and the Audi Q5. By the numbers, the Infiniti Q30 will be solid competition against those Euro models.

The Q30 offers excellent steering, further enhancing the overall ride and handling feel, as well as a tuned suspension and body response that's uniquely Infiniti," says Grahame Cornforth, Infiniti Chief Vehicle Engineer. "Thanks to this set-up, the car offers a firm and in-control driving sensation, a perfect example being Q30's ability to confidently steer the right cornering angle and 'hold the line' precisely though the corner."

This comes with the great look of the Q30, which carries the bold statement seen in all Infiniti models and design-focused build.

Toyota's First EV Will Have a Name of BZ: Toyota BZ
First Videos From Inside The Boring Company's Las Vegas Loop
END_OF_DOCUMENT_TOKEN_TO_BE_REPLACED