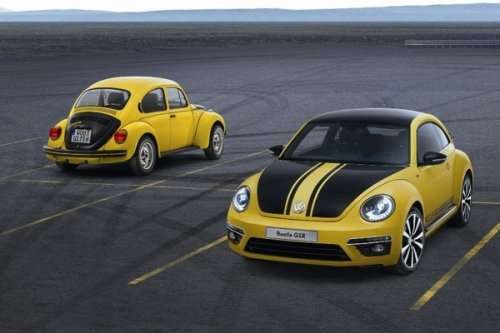 The new Volkswagen Beetle has definite girl power, being often cited in the press as a car that appeals to women, but VW is shaking that perception in Chicago after revealing the hot new 2014 Beetle GSR, set to come to our shores in production-limited numbers.
Advertisement

One of the few cars that can truly be called "neo-classic," the new Beetle debuted just over a decade ago as a fresh take on the former worldwide phenomenon that was the Beetle. It immediately had appeal to women drivers, who make up the bulk of its purchasers in North America.

The original Bug (aka Type 1) was the mainstay of Volkswagen for decades, providing the bread and butter that allowed them to develop and offer other models in their lineup and was the most-manufactured car of a single design platform, worldwide. Its production end brought cries of joy and sadness, depending on who you asked, and then its re-introduction in 1997 as the New Beetle brought those same reactions, often not from the same crowds. That New Beetle was replaced by the Volkswagen Beetle (aka A5) in 2011, the car the automotive press has consistently called the "girliest" of the Beetles.

Volkswagen has tried to shake that feminine undertone by offering very male-oriented special editions of the Beetle, such as the Black Turbo (often reversed to Turbo Black) edition last year - of which only 600 units were produced for North America. That male cred was immediately smashed with the introduction of the very Barbie-esque convertible hatchback unveiled at the LA Auto Show for 2013 sales. The special editions based on decades (i.e. the "Fifties", "Sixties" and "Seventies") featuring paint schemes to retro back to those times didn't help the situation. Neither did the announcement of a special XBOX edition improve matters.

The Chicago Auto Show, however, offered a new opportunity for Volkswagen to once again debut a Beetle that would shake and perhaps begin to shed the "girl car" stigma the Beetle enjoys. VW wisely took that chance and has debuted the very cool 2014 Volkswagen Beetle GSR, a speed-invoking, testosterone addled design for the little Beetle with a black on yellow street cred paint scheme.

Of course, paint schemes do not the car make, nor does putting "racer" in the car's title do the job - GSR stands for "Gelb Schwarzer Renner" or "Yellow Black Racer." Harkening back to a popular (and also limited edition) model of yesteryear, the 1303S (also pictured) helps, though. So does adding in a turbocharged engine, 19-inch wheels (over the stock 15-inch), 235/40 performance tires, sport seating, GSR shift lever, and a large rear spoiler just to make sure everyone knows this is a race car.

The engine is really where it's at, though. The 2.0-liter turbo TSI puts out four times the horsepower the original 1303S did (it had fifty whole horses in there). The better, retuned engine means the 2014 Beetle GSR pulls 210 horsepower as opposed to the same engine in the Beetle Turbo which does 200 even. The standard 6-speed manual couples to that engine and can be upgraded to the 6-speed dual-clutch DSG automatic, which actually improves quickness to a 6.6 second 0-60 time. Top speed is 130 miles per hour.

Add in the Fender Premium Audio System (a must-have in any Volkswagen) and panoramic sunroof and you have a really great Beetle. Great enough to shake off the "girlie man" jeers from your friends? Perhaps. Great enough to become the next chick-magnet? Definitely. But if you want one, you'll have to get in line; and fast. VW is only building 3,500 units worldwide and only half of those will be coming to America.