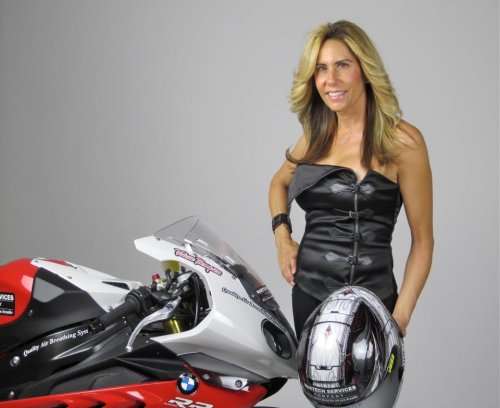 One of the fastest women on two wheels will be presenting the fastest production V-twin supercruiser at the world's largest collector car auction next week.
Advertisement

What do you do if you have the world's fastest production V-twin motorcycle and want to present it at the world's largest collector car auction and event? Why, you find the beautiful Valerie Thompson, one of the fastest women on two wheels, and ask if she'll present it for you.

That's exactly what the Viper Motorcycle Company has done. The two-time Bonneville land speed record holder will be on hand to present Viper's new Special Edition Diamondback "supercruiser" at Dana Mecum's 25th Original Spring Classic Car Auction on May 16th in Indianapolis. The auction is the largest collector car auction in the world and is a fitting place for something as cool as the new Viper V-Twin Special Edition to debut.

Valerie Thompson, of course, is about the only thing that could eclipse this awesome bike for style and ability. She currently holds two speed records at the Bonneville Salt Flats through her racing company, Martech, including a 201 mile per hour run. She will vie for the official title of "World's Fastest Female" when she pilots the North American Eagle Supersonic Speed Challenger to attempt a break of the current 512mph speed record. No, that's not a typo. Five hundred and twelve miles per hour is the current land speed record for a female driver.

The Special Edition Viper Diamondback is a motorcycle befitting this speed-demonette. The production V-Twin has a 512 cubic inch Viper/Ilmor engine producing 165 foot pounds of torque at 130 horsepower on the rear wheel. It's on-the-fly adjustable air-ride suspension gives it the Sportbike name and handling, superior engine cooling, and a customizable rider experience. It can be tuned for riders ranging from 5-feet, 3-inches up to 6-feet, 7-inches in height. Over 80% of every Viper model is proprietary to the company, including this engine, and most parts are hand-made at their Auburn, Alabama factory.

Dana Mecum's 25th Original Spring Classic Auction will have over 2,000 vehicles on site at the Indiana State Fairgrounds in Indianapolis and will be televised live on Discovery Channel's Velocity Network starting May 15th. The Viper unveil will be on May 16th and will be televised through VN.