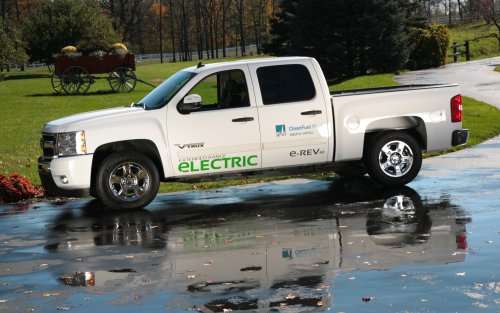 VIA Motors of Orem, Utah has built an extended range electric pickup truck that works in a way similar to a Chevrolet Volt. It is now being tested by, appropriately, a Utah power company.
Advertisement

VIA Motors, which is famously backed by Bob Lutz, the former General Motors icon who is widely considered the "father" of the Chevrolet Volt and who sits on the VIA Motors board of directors, has produced a range-extended electric vehicle (RE-EV) called the VTRUX. The truck is being tested by a Utah power company, Rocky Mountain Power.

At a press conference in Salt Lake City, Utah, representatives of the two companies showed off the heavy duty pickup truck sporting Rocky Mountain Power logos and an electric lightning storm logo shaped like the Rocky Mountains. RMP will use two of the pickups for four months to evaluate their performance versus their gasoline and diesel counterparts in the power company's fleet of over 1,000 vehicles.

“We’re excited to take this truck on an extended test drive, kick the tires if you will,” said Rocky Mountain Power President and CEO Richard Walje. "We do a lot of work out in the field … we'll load them up with lots of equipment, tow things with them and validate they will actually work for us as a replacement for the fleet we have."

The VIA VTRUX is a 402 horsepower electric truck with about a 40 mile range per charge using the company's proprietary eREV powertrain. Once the charge is depleted, a gasoline engine acts as a generator to recharge the batteries in a setup very similar to the Chevy Volt. The truck's full range is about 300 miles in total. The truck gets an estimated 100 miles per gallon (running without load). Recharging the batteries from a plug takes about 4 hours at 220 volts and around 11 hours from a 110 outlet.

Towing and hauling capacity are equivalent to the gasoline-only counterpart of the pickup. It's payload capacity is 1,500 pounds and its unspecified towing capacity is said to be equivalent to a 1/2 ton truck. Curb weight is 5,500 pounds. The power generating engine is a GM-sourced 4.3-liter V6. The truck also has the ability to power items on a work site, eliminating the need for a separate generator on board.

The VTRUX is Via Motors' first production-ready vehicle and is meant primarily for commercial sales. It's based on a GMC/Chevrolet half ton truck platform. Designs for an SUV and van as future models are also based on current GM truck-based platforms.