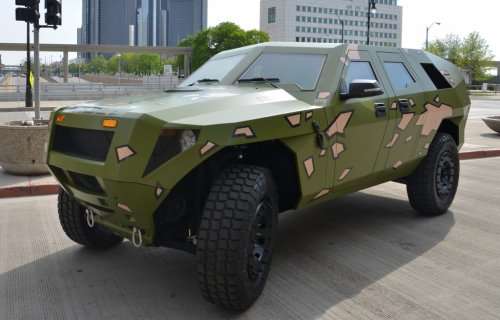 Last year, the Army unveiled the FED Alpha concept, a possible replacement for the venerable Humvee as the military's go-to get-around vehicle. The Alpha had all of the power, mobility, all-terrain capability, and armor upfitting needed to replace the Humvee, plus something even more important: battlefield fuel efficiency nearly twice that of the diesel-powered Humvee.

Now, a next-generation of the diesel-electric hybrid FED is being shown, this time called the Bravo (second-generation) with all of the power and capabilities of the earlier version, but with one important addition: power export capabilities to allow soldiers to plug in their external devices such as communications, tools, as well as to allow the vehicle to act as a small generator/power plant for other applications.

The FED is a full hybrid weighing in at 16,700 pounds. It's powered by a 4.4-liter, 8-cylinder diesel engine from Ford coupled to a six-speed automatic transmission to the rear axle. On the front axle is an electric motor powering the front wheels and acting as a regenerative brake to slow and stop the Bravo and recharge the on-board lithium-ion battery pack.

The vehicle has automatic start-stop for idle efficiency, shutting down the engine when the batteries are charged and keeping most systems operational through them. The engine will automatically restart to recharge the batteries when in generator mode and under normal operating conditions. The vehicle is capable of going all-electric for short distances at lower speeds (about 5 miles) on batteries alone.

More efficiency was gained by combining the hydraulics for the braking and steering to reduce parasitic loss and its brakes are carbon-ceramic rather than steel, reducing weight without losing braking power.

Compared to the traditional diesel engine Humvee, which gets about 3-6 miles per gallon on the highway, the FED Bravo gets 8.2mpg in the city and 14.2 on the highway. The Army did not release off-road MPG.

The FED system is a project of the Army's Tank Automotive Research Development and Engineering Center (TARDEC) in Warren, Michigan and receives design input from students at the Center for Creative Studies in Detroit. This is not the only hybrid vehicle under development at TARDEC. Others, including the special operations Clandestine Extended-Range Vehicle (CERV), also a diesel-electric hybrid, is a sort of military dune buggy on steroids. The Army is also working on armored vehicles and tanks using hybrid and alternative fuel propulsion systems.

The Department of Defense recognizes that one of the most vulnerable and costly supply chains in its logistics is fuel. Getting fuel to and from battlefields and between way points in a war zone is dangerous and is often one of the weak links holding today's mobile forces back. By increasing efficiency and moving to alternative options, the Army (which does most of those logistics on the ground) is working to lessen or even eliminate that weak logistical point.