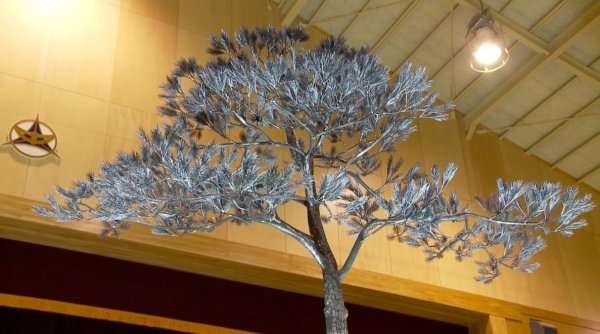 Technicians from Japan's largest automakers came together to craft a steel replica of the ippon matsu tree, symbol of the tsunami's impact on Japan's Iwate Prefecture. The steel tree stands as a tribute to the thousands who remain displaced.
Advertisement

When the tsunami hit Japanese shores three years ago, the international press focused on Fukushima and the nuclear disaster that unfolded. Left largely ignored, therefore, were the one in ten residents of the town of Rikuzentakata, Iwate Prefecture, who died that fateful day and in the aftermath of the wave. Also largely forgotten were the thousands of trees that dotted the landscape of this beautiful place and that were all washed away. Save one.

The ippon matsu, or "miracle pine," alone stood its ground after the great wave washed the forest away. That tree has since died and been replaced with a replica, but it became the symbol of the people of the province and their struggle to remain strong in the aftermath. Today, three years later, a quarter of the population of 20,000 people living in Rikuzentakata are living in temporary and pre-fab housing awaiting the rebuilding of their homes.

As tribute to the losses and the stoicism of those who remain, the Japanese Automobile Manufacturers Association (JAMA) gathered together nine technicians from Nissan, Toyota, Mitsubishi, Mazda, and Hino to create a steel model of the ippon matsu. The statue, called simply The Tree of Hope, is now complete.

Hammered from steel from sketches of the original tree, the finished tribute is a beautiful rendering of a strong, resilient pine tree holding fast in the face of destruction.

When the replica was presented to the city, the technicians first visited middle schools to show students, hands-on, the techniques used to make such a crafted sculpture of hard steel.

Nissan technician Ippei Katagir from Kesennuma, 20 minutes south of Rikuzentakata, said the support Japanese car manufacturers can provide towns like his is clear. "I think we just have to build good and affordable cars," said Katagiri. "That's what we have to do."

It is also important to remember, he says. "I would like for people who haven't been here yet to visit and remember what happened here," said Katagiri.

Today, Ktagiri and Nissan point out, the town of Rikuzentakata has more trucks and bulldozers than cars, more dirt and stone being moved than houses built, and more hope than ever before.

JAMA Chairman Akio Toyoda explained the "kibou no ippon matsu" was an opportunity to unite across differences. The idea originated in his company of Toyota, but only came to fruition through the cooperation of 14 Japanese carmakers.

This video tribute explains the rest.