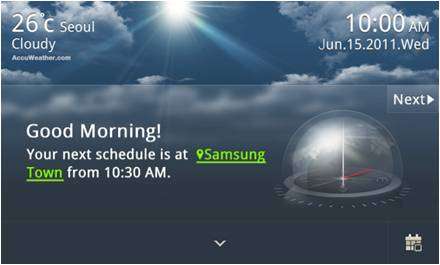 If you have ever wanted to talk to your car and get a response, that future is coming fast. Samsung and Toyota have announced a collaboration that will bear fruit later this year with a Car Mode Application that integrates voice commands for advanced functionality. The marriage of human and vehicle is happening.
Advertisement

The collaboration is between Toyota's In-Vehicle Infotainment (IVI) system via MirrorLink and Samsung's Smartphone integration through an extension of their Car Mode Application. It leverages the safety of in-car user experience (UX) technologies for music, location, hands-free calling, voice interaction and text-to-speech. It will all be demonstrated at the Mobile World Congress 2012 in Barcelona.

The plan is to seamlessly connect Samsung phones to Toyota's IVI system so that drivers can interact with their phone's services and capabilities in a totally hands-free manner. Think of it as a rudimentary version of Kit from the television show Knight Rider or the Star Trek ship-board computer.

The companies have drawn up plans to commercialize the solution at its unveiling next quarter, so development is obviously at a late stage.

With the app on their Samsung phone, users would be able to talk to their car to pull up navigation options, request music from either their phone or Toyota's stereo integration, make hands-free phone calls or answer the phone hands-free, and otherwise interact with the phone and car's capabilities easily. It appears to be capable of doing everything but drive the car for you.

This collaboration isn't the only one in the industry, of course. The general trend is towards cars becoming more and more like smart phones with wheels. My Ford Mobile, shown off at the Consumer Electronics Show last year, will be a centerpiece of the company's new electric, the Focus Electric. That app allows users who are away from their cars to still "talk" to it, soothing concerns over its safety and well-being while you're away.

Daimler is doing similar things with their in-vehicle integration systems. The term "infotainment" is thrown around by most automotive executives, in fact, as something coming in the very near future for cars. Today, having BlueTooth and the ability to plug in your phone or MP3 player is becoming standard equipment on cars. Navigation systems are almost ubiquitous as well and many of the newer ones can plug into your phone's GPS locator to integrate your personal address book with the nav system's.

This latest announcement from Samsung just goes to the next logical step: even more control via voice recognition. The day is fast approaching where talking to your car as you would any personal assistant, by voice, will be normal. Will new relationships blossom and strange new marriage laws be required after that? Time will tell.