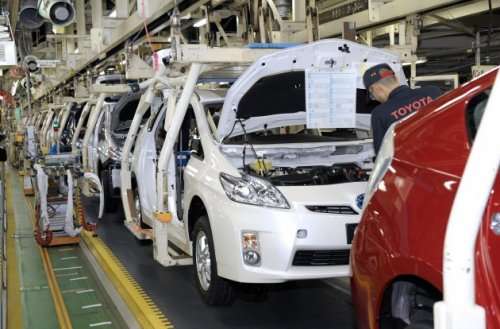 Last year a combination of economic recession and the Japanese tsunami caused Toyota to lose its position as the world's largest auto manufacturer by volume, with General Motors taking its place. Now Toyota has taken that title back.
Advertisement

In 2011, Toyota lost the top spot as the world's largest automaker to General Motors after getting hit with the double-whammy of a long, worldwide recession and the tsunami that stopped much of Japan's manufacturing and shipping industries.

Toyota has now taken that top spot back, however, as first quarter sales figures for 2012 show the Japanese giant moving 2.49 million vehicles for the first three months of the year compared to GM's 2.28 million and Volkswagen's 2.16 million units in figures given by Bloomberg News.

Before losing the (largely symbolic) title of largest automaker in 2011, Toyota enjoyed a three year run at the top. Then in 2011, after disaster struck, they fell to third behind VW. 2011 sales figures had GM at 9.03 million, VW at 8.16 million and Toyota at 7.9 million.

Of course, since these are just unit sales figures, they don't necessarily denote the world's most profitable or powerful automaker. That title would be up in the air for claim by whomever's accountants you wanted to listen to.

All three companies are multi-national with diversified manufacturing, sales and supply chain systems spanning the globe. While Toyota will likely keep the top spot for units moved this year, given sales figures and growth numbers, all three companies are very obviously weathering the financial storm that has been rocking the planet for the past few years.