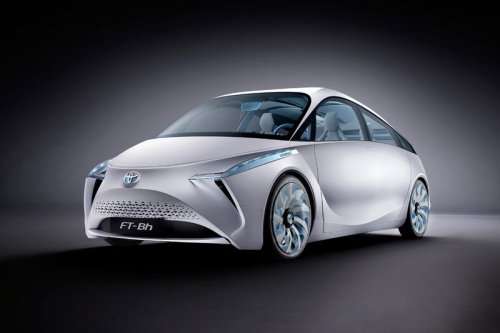 Toyota covers all bases with the new FT-Bh hybrid

Toyota unveiled the new FT-Bh conceptual, showing the next generation of gasoline-electric hybrid ideas at Geneva; will see CNG hybrid and plug-in variants as well.
Advertisement

Toyota appears to be covering all bases with the new concept they've unveiled at the Geneva Motor Show. The Toyota FT-Bh (Future Toyota B-segment hybrid) is a lightweight, next-generation concept car which will have gasoline-electric, CNG-electric, and plug-in variants.

Toyota is expecting hybrids to become widespread before 2020 and has developed the FT-Bh with that in mind. As a B-segment, it will be ultra fuel-efficient and sold under a possible theme of "ecomotion" (eco + emotion). On display in Geneva is the hybrid-electric version which is based on a Hybrid Synergy Drive drivetrain. That rendition will have a CO2 emissions profile even lower than the Prius c at 49g/km.

The natural gas hybrid will have CO2 emissions of only 38g/km and the plug-in hybrid (gasoline) version would cut that down to only 19g/km. Although not mentioned, a PHEV in CNG rather than gasoline would likely be much lower than that, perhaps in the single digits.

The secret behind the efficiency of this new little B-segment concept is in its combination of weight reduction, more-efficient power train, and reduced drag (air resistance). The hybrid version gets an estimated 112mpg US under the new European driving cycle (NEDC).

Weight Reduction
The curb weight of the FT-Bh is 786kg (1,733 lb) and it achieves this without expensive carbon fiber or the heavy use of aluminum, but using high-tensile steel. Interior thermal management is added, along with stability and sound control, by filling gaps with high-expansion foam.

Reduced Resistance
Lower air resistance is given by a body design that gives a drag coefficient of only 0.235, several points lower than the current-generation Prius. The concept also features the new Michelin 145/55R18 low-resistance tires, adding to the car's efficiency.

The overall concept is intriguing and shows that Toyota is expanding on the Hybrid Synergy Drive and vehicle designs around it while remaining open to options outside of just gasoline. With the much lower cost at the pump for natural gas, a hybrid option using CNG seems like a no-brainer. Expanding the hybrid and plug-in line of models at Toyota is also an obvious step towards better fleet efficiency.

Tesla Giga Berlin's New Hurdle: It's Not Only the Gov't, but Now Tesla Itself
Teslas Are Sold Out Until 2023, But The Timing May Reverse
END_OF_DOCUMENT_TOKEN_TO_BE_REPLACED