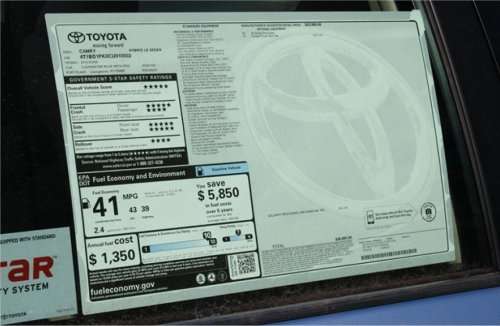 Toyota has released pricing information for some of its top-selling cars, including the 2013 Camry and Camry Hybrid, 2013 Prius c, and 2013 Scion xB. Plus price adjustments for most of its other vehicles, including the Venza, FJ Cruiser, Sienna, Land Cruiser, Sequoia, Highlander, Tacoma and others.
Advertisement

Toyota will be adjusting prices on most of its model line by about 0.6%, reflecting higher costs and inflation. Several specific models were given full pricing information, with anticipation of release early next year.

Model improvements in the Camry line include the L and Hybrid LE trims getting Display Audio as standard equipment. The Camry SE will have Blind Spot Monitor and Rear Cross Traffic Alert available. A new lane-change feature for the turn signal control stalk allows the driver to tap the stalk for a 3-blink burst for lane changes. All Camry models will see updated door trim and leather-equipped models will have updated stitching accents on the door panels.

With this price increase comes a glut of now-standard features. A new front bumper with integrated LED accent lighting and rear bumper with black diffuser are now standard. Interior changes include light bronze metallic and chrome accents and a new seat fabric. BeSpoke Premium Audio is now available for the 2013 xB and two new colors have been added to the model option lineup.

All listed prices do not include destination or handling.