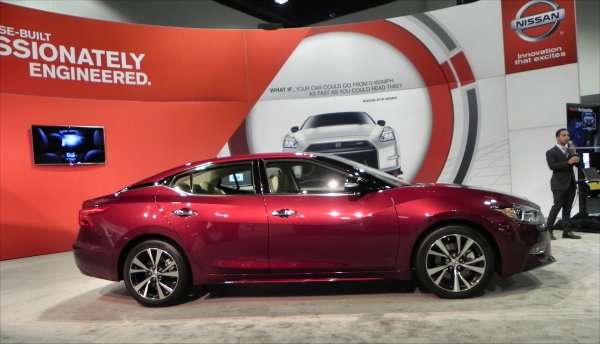 Time for a New NISMO. Could it be a Maxima?

Any time now, Nissan will be announcing the next vehicle to get the NISMO factory tuning treatment. We've speculated before, but the choice now seems very obvious. The Maxima should be the next NISMO car.
Advertisement

Fans of the Nissan NISMO brand know that it's not just a factory name tossed on a few body kit upgrades to add more markup to a car for sales. It's a passion and denotes a vehicle that has literally been tuned, top to bottom, for performance. The Juke NISMO, for example, is very different from the standard Juke, with more horsepower, better handling, and a lower, faster stance. Although adding the NISMO name to a vehicle is no small matter, Nissan has been aggressively putting out NISMO-tuned variants of its models, starting with the obvious sports cars like the GT-R and 370Z, then to its quirkier offerings like the Juke. Now, it's about time for another NISMO to unveil and up until I saw the new Maxima in person, I would have thought that the choice was wide open.

The 2016 Nissan Maxima unveiled in New York earlier this year and I saw it for the first time a few days later when it was brought to Denver, Colorado for the annual auto show there. It's new 3.5-liter V6 outputs a phenomenal 300 horsepower and runs through the latest-generation Xtronic continuously variable transmission (CVT). That includes performance driving programming in the Xtronic.

Now knowing this, it's easy to speculate what a 2016 Maxima NISMO would look like. The bodywork on the new Maxima is already very aggressive and beautifully aero-tuned. With a NISMO package, the fender lines could be muted a bit, the stance lowered a few millimeters, and more aggressive fascia and running board lines added to improve downforce and give a more track-ready appearance.

Under the hood, it's plausible for that V6 to get another 10 or more horses with some tuning. 15 more would be realistic without becoming too expensive. Add some track tuning to the suspension, make the CVT more robust or replace it with a geared transmission, and the car could easily be capable of blistering times compared to similar V6 sedans.

Yes, the 2016 Maxima seems the next logical NISMO candidate.