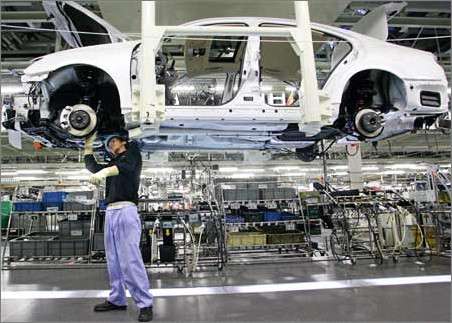 Demand for Toyota vehicles has increased as the nation's most highly regarded auto brand (see here) sees huge sales growth that's outstripping demand. The company's most popular models, the Camry SE, Corolla, and RAV4, are running into low supply even as the company's overall supply of vehicles reaches one of the industry's lowest figures at only 42 days.

To meet demands, Toyota is increasing production and adding shifts to plants throughout North America. The company's Mississippi plant, for instance, has added a second shift, which increases production to 150,000 Corollas annually. The Camry SE, fast becoming the automaker's fastest-selling vehicle, has seen a sales jump of 56% year-on-year this month. Toyota executives have been quoted as saying that this model is "on fire right now" in terms of sales.

Other models such as the popular Tacoma pickup truck and RAV4 crossover are also seeing sales jumps. Both of those vehicles are also built in North America and have seen high sales demand increases year-over-year.

With the expansion of the company's Prius line of hybrid cars, demand is also expected to increase for those vehicles. The Prius v wagon, aimed almost entirely at the American market, is expected to see sales that could meet totals for the tried-and-true Prius hatchback, which reached over 400,000 units last year. Sales goals for the Prius V are set at only 16,000 units for 2012, which many believe will be outstripped by actual demand.

Overall, things are looking good for Toyota as a company in recovery from natural disasters in both the U.S. and Japan. Sales are high and consumer demand is high. For the consumer hoping to buy many popular models of Toyota, however, this could mean some will be harder to find.