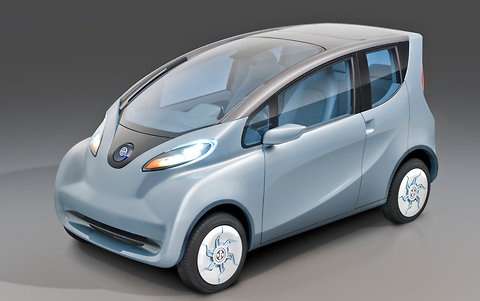 The Tata eMO Concept: India Struts Its Stuff in Detroit

Tata Motors, the largest automotive manufacturer in India, made headlines in USA when it produced the world's cheapest traditional car in 2008, the diminutive Nano selling at $2,500USD in their home country. Now, the automaker is looking forward to the future with a new concept electric car called the electric MObility study (eMO), which debuts in Detroit at the North American International Auto Show this week.
Advertisement

Tata eMO is the company's entrant into the Michelin Challenge Design competition and Tata has clearly said the car is a concept only, meant to showcase its future direction overall, and will not be going to production. The vehicle is an engineering study that has garnered the company 15 patents internationally.

The design concept is beyond just another electric car. The eMO is a look at the entire car manufacturing process, from raw materials to finished product. The company's goal was to design, on paper, a vehicle that would be environmentally friendly from conception to the street. This is what really sets apart the eMO from the average “green car” like the Chevy Volt or the Nissan Leaf.

Tata started with two goals: design an electric car that could suit the needs of an average family for average use – so it must seat 4 or 5 and be able to travel at least 50 miles on a charge. Next, they wanted the car to be affordable enough that it could be a first or second car for the average middle-class family and set the price maximum at $20,000USD.

The eMO has a (stated) range of 100 miles per charge, which even after adjustments for real-world driving, would still beat the company's goal of 50 miles. It seats four adults (or three children in back, making it five) with two buckets in front and a bench at rear. Cargo space is, however, limited to the back seat.

Made purely for city driving, the sparse interior and small tires are definitely not going to make for highway comfort. The car has a top speed of 65mph, however, so it would have both city and highway capability. Tata calls this concept “New Urban.”

The fact that the car will not be destined for production is shown in its shortcomings. The concept itself is shy of many safety requirements for European or American distribution. The rear seat is literally right up against the rear window, making for some real back pain should the car get rear-ended. The roll cage is slim thanks to the heavy use of carbon fibers and glass and the eMO has no frontal crumple zone for head-on or corner collisions. Of course, Michelin's rules do not require any of these things, so the concept is a fit for the competition.

Where the car is really set apart from others, as mentioned, is in the manufacturing process itself. The Indian company aimed directly for green start-to-finish. This is what makes it a force of interest in this year's Michelin challenge.

The manufacturing solution for the car is fairly straight forward in its aim. Using a Small Assembly Footprint Methodology, Tata designed a plan that would not only utilize as many recycled products as possible in the car's assembly, but that would recycle as many things as possible in the actual plant as well. This meant a design-build process that uses low-carbon or carbon-neutral products, recycled steel and materials, and in which the manufacturing itself as energy efficient as possible. The result is a conceptual factory that automates many processes and simplifies many others.

It's a manufacturing model that other automakers are likely to take note of. Subaru has made similar gains in its own U.S.-based factories and Toyota, Ford, and others aren't far behind.

LG's New EV Battery Plant Is a Welcome News for Tesla
Tesla Giga Berlin's New Hurdle: It's Not Only the Gov't, but Now Tesla Itself
END_OF_DOCUMENT_TOKEN_TO_BE_REPLACED