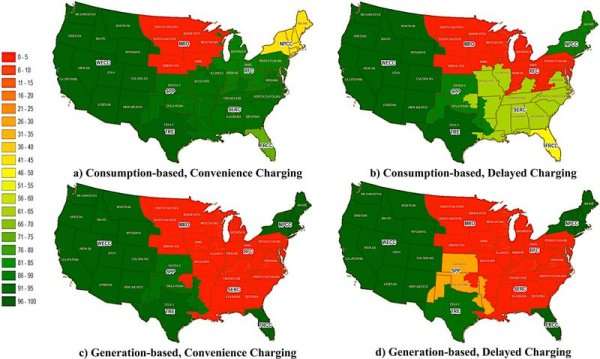 When compared to the Toyota Prius Plug-in Hybrid and Chevrolet Volt, the Nissan LEAF electric car produces less CO2 emissions overall in most of the U.S.
Advertisement

A new study from Carnegie Mellon University has found that lifecycle carbon dioxide (CO2) emissions pr mile traveled for plug-in hybrid and battery electric vehicles can vary widely. Grid emissions factors (aka "carbon footprint" for electricity production) matters far more than does the vehicle's drivetrain. In some markets, for example, the Prius Plug-in with its gasoline engine generator can be more carbon efficient than the fully electric Nissan LEAF. For the most part, however, the LEAF is more efficient in most regions of the United States.

The research team behind the paper created geographic regions based on predominant power production methods and resulting emissions. They also separated assumptions of usage for the vehicles in question based on two charging scenarios: convenience-based and delayed charging. Two further extrapolations were made using "generation-based" versions of the two charging methods, which changed some regional assumptions in power plant emissions based on grid boundaries and usage patterns.

Contrary to many assumptions, for example, delayed charging often means higher emissions for the vehicle due to the tendency of power plants to switch to or more heavily utilize coal over other methods during the late night and low-use wee hours. Most coal power plants operate at the same general level of output (and coal burning use) throughout the day whereas other methods, such as natural gas and alternatives, tend to operate with more fluctuation and are usually at their lowest output points at night.

The study compared the all-electric Nissan LEAF to the Chevrolet Volt and Toyota Prius Plug-in. The purpose of the study was to give a more useful and pragmatic benefits analysis of a growing electric vehicle market to policymakers. The paper concluded:

Given substantial regional differences in PEV GHG emissions implications, differential regional policy may be warranted, but current differences in state subsidies do not align particularly well with regions where PEVs provide the largest GHG emissions benefits. For example, the state with the largest state subsidies ($7500) for BEVs is West Virginia, which is under the RFC region, where the Nissan LEAF and the Chevy Volt are likely higher emitting than the Toyota Prius. Under the Clean Power Plan Proposal, West Virginia is expected to bring down its carbon rate to about 730 kg/MWh, but that level is not yet low enough for PEVs to be lower emitting than the Prius, and the effect of average emissions reductions on marginal emissions has not yet been characterized. The second highest state subsidies ($6000) are in Colorado, part of the WECC region where the LEAF is likely lower emitting than the Prius and the Volt may be higher or lower. The third highest state subsidies ($5000) are in Georgia, where the comparison of the Leaf and Prius is inconclusive and the Volt is higher emitting. Of course, GHG benefits must be balanced against other goals, including reduction of air pollution and oil dependency as well as economic factors.