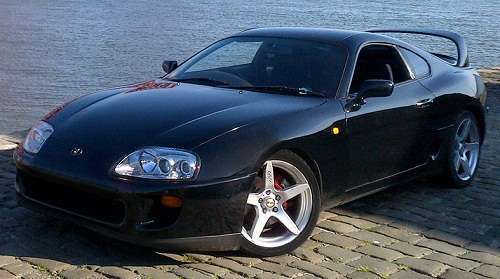 The 1994 Supra was a customized speed machine owned by model and actress Jess Barton, who happens to be hot for fast cars.

The Supra was stolen last week and found found today stripped down to its bare bones and left for dead, all of its high-end (and high dollar) parts stripped off and gone. The car was capable of an 8-second quarter mile and the model was fond of making people drool with more than just her good looks. She was directly involved in most of the car's upgrades and modifications and is well-known for her abilities with a wrench.

The super-fast Supra was customized with a massive 1,200 horsepower output with parts worth more than the car's original selling price. The car was an 8-year project for the model to restore and upgrade and was the prize in her small collection of muscular machines.

Jess Barton is a waitress at the world famous Dancers Royale in Orlando and has appeared in numerous auto-related photo shoots along with her sister Jenn Barton. She co-starred in the camp film Zombies! Zombies! Zombies! as well. Her Instagram posts about the car theft have been emotional and show her dedication and love for the car and now towards finding its "killers."

Barton told Yahoo! Autos that the car is irreplaceable and has "hundreds of thousands probably invested in it." Fans on Supra Forums and others are scouring sites like Craigslist for the parts, hoping to find a lead (and claim the reward). Barton says the car's modification upgrades include a Tilton clutch (no longer made), a Precision 88/91, Penske suspension designed specifically for the Supra, modified stock intake manifold, a Darin harness, and a nitrous direct port setup.

Barton asks anyone with information to contact [email protected]