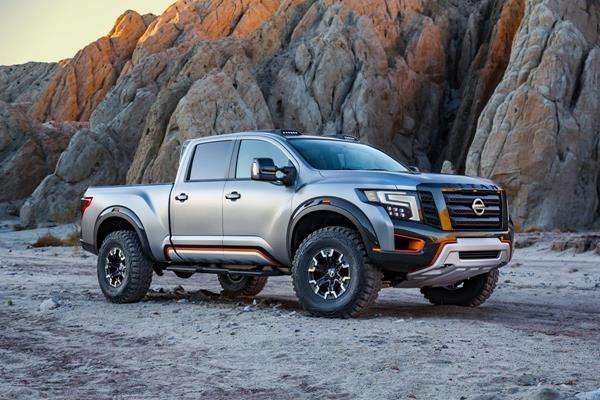 The all-new Titan XD just launched in December and at the Detroit show, it’s being celebrated with an extreme design study called the Warrior Concept. This extreme XD is aggressively targeting off-road as its focus and it’s friggin awesome.
Advertisement

One thing we all know about pickup truck buyers is that they’re nuts for modifications. Truck makers have finally begun to realize this and are beginning to cater to those wants with off-shelf, warranty-retaining options and dealer-installed upgrades that dip heavily into the traditionally aftermarket field of offerings. Nissan seems to be looking at this as well and has gone to great lengths to include aftermarket suppliers in the final design phases of the Titan XD.

With the Warrior Concept in Detroit, the company seems to be showing what can be done. More so, though, the Warrior builds on the Project Titan modifications that ultimately gave two Wounded Warriors the adventure of a lifetime in Alaska. Embracing the love of truck buyers and their lust for rugged and ready add-ons for their rigs, Nissan is showcasing a lot of what’s possible for the new turbodiesel-powered Titan XD.

And it's awesome. So awesome you'll do pelvic thrusts and yell things like "WOOOOooooo!" while doing fist pumps. Get a headband, brother. It's time to go nuts.

A full three inches of ride height were added to the Titan XD for the Warrior (going from 78.7 to 81.5) and 37-inch off-road tires were put on thanks to that new clearance. These encase powerful 18x9.5-inch alloy wheels. This also extended the width of the truck by about six inches to accommodate those tires and the higher stance’s stability requirements. All of this meant that the suspension was completely overhauled as well.

Appearance additions on the wheel wells, the rear of the cab, and the front fascia (among other places) accent the tough appearance of the truck with what Nissan calls “modern armor.” Fender flares, modifications to the headlights, and a bigger, beefier skidplate were also added. For panache, a few aerodynamic carbon fiber elements were also added.

The interior sees similar treatments, with new seating, a custom-milled steering wheel, and auxiliary toggles added to the center stack.

What results is an extreme version of the Titan XD that could easily give the Ram Rebel or Ford Raptor reason to be nervous.

Tesla Contemplates A New Strategy for China Retail even As Sales Boom
Jay Leno on Elon Musk & EVs: “I Think He Should Get ... Credit"
END_OF_DOCUMENT_TOKEN_TO_BE_REPLACED