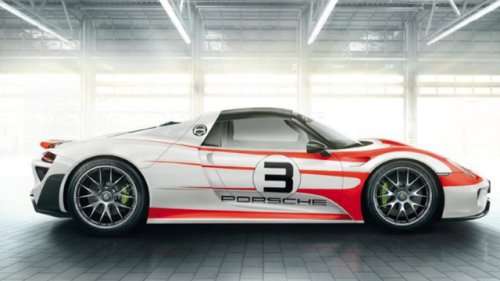 The new definition of supercar may be had with the Porsche 918 Spyder hybrid. At 800 horsepower, it's one of the most powerful street legal cars on the planet, but at 78 miles per gallon, it may also be one of the most efficient as well.
Advertisement

One of the sports car items that just keeps coming back to the headlines is the Porsche 918 hybrid planned for a 2014 release. It's one of those upcoming cars that just keeps reappearing of its own accord. And people remain fascinated.

Can you blame them?

It's a Porsche, for starters, but add on the fact that it'll have 800 horses thundering inside, but with a hybrid powertrain so some of those horses are electrified, and for all that, it gets 78 miles per gallon. That's better mileage than nearly every hybrid available today. And none of them have the supercar track growl that this Porsche sports.

A leaked brochure gives further details on the upcoming manly hybrid. First, two classic racing designs will be available for the exterior of the 918 Spyder, the Martini and Salsberg options. Salsberg is shown here. A full dozen more options for exterior paint are also available, a couple of which are retro colors from the outgoing Carrera GT.

The interior of the Porsche 918 Spyder is also very Carrera-like, but sports a larger screen on the center console and a more futuristic feel with metallic hints throughout. Still, the hollow V-shaped center console and headlight-shaped rounded dials remain, as does the racing 3-point steering wheel and curved chrome inner doorhandles.

Previously revealed were some of the mid-mounted engine and hybrid drivetrain components. A 7-speed PDK transmission mates with the high-rev V8 engine to drive the rear wheels, but includes an electric-assist motor as well. The front axle is powered by an electric motor of unspecified horsepower and a lithium-ion battery pack sits at the car's halfway point, just behind the driver and passenger's seat on the floor. The front motor must have a lot of oomph, however, as the power split is 57:43 in favor of the rear axle. This is unspecified, but likely is at standard speeds rather than race track fly-by rates.

The power curve in the literature is also telling. It peaks at about 795 horsepower and, by percentage, about three quarters of that is from the combustion engine with the electric assist at rear and front axles making up the rest is roughly equal parts. The chart's hill climb, however, shows the majority of power coming from the rear axle motor through most of the early mileage, but as speed gains, so does the input from the combustion engine. The front axle doesn't really come into play until later in the game as the car approaches highway speeds, at which point the electric assist at rear has already reached maximum output.

Truly a beautiful machine, the 918 Spyder may be Porsche's greatest entry into the top-end supercar category to date.

Tesla Contemplates A New Strategy for China Retail even As Sales Boom
Jay Leno on Elon Musk & EVs: “I Think He Should Get ... Credit"
END_OF_DOCUMENT_TOKEN_TO_BE_REPLACED