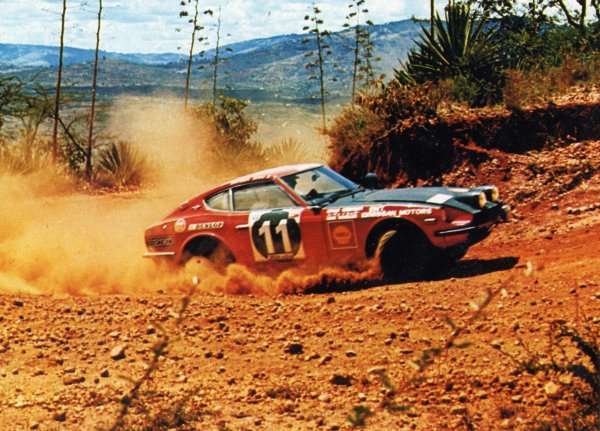 The Nissan Z race car was one of the most prolific racers of the early 1970s. One of its most renowned was the Safari Rally Z, which the NIssan Restoration Club plans to revive. Datsun 240Z fans, rejoice!
Advertisement

In the late 1960s and early 1970s, the Fairlady Z platform, known as the Datsun 240Z in North America, was the darling of the race circuit. These sporty little machines were often souped up, modified, and fitted with race-ready components for competition in both amateur and professional circuits. On the official Nissan racing teams, though, none of the Z cars were more popular at the time than the Safari Rally Z, whose stellar career included wins in Africa, Australia, and other world-famous rally races. This great little sports offroader replaced the Datsun 510 "Bluebird" rally car.

One car made specifically as a Rally Z was the Safari Rally Z driven by Edgar Hermann and Hans Schuller in 1971 to a victory in East Africa at the 19th Safari Rally. It would go on to win again in 1973. The car was retired soon after in favor of Nissan's newer Z platform, the 280Z.

The Nissan Restoration Club, which began in 2006, has been finding and restoring to museum quality the cars of Nissan's past. So far, the club, which is made up of volunteers from the company's Research and Development department and which now boasts 60 members, has restored to operational eight total vehicles, many of which are on display in California right now during the Nissan 360 event in Irvine. These include the 1964 Skyline racecar, both the "Fuji" and "Sakura" Datsun 210s that won the Mobilgas Trial in Australia in 1958, and a 1947 Tama electric vehicle. The Safari Rally Z will be the club's ninth project to-date.

The Safari Rally Z was a modified Datsun 240Z from Nissan's racing program at the time. It features a 2393cc overhead camshaft inline-six engine (L24) tuned to produce 215 horsepower. This resides in a closed, fast-back coupe bodied 240Z/Fairlady. The car, since its retirement, has been kept in the Nissan Heritage Collection in untouched condition. Restoration will include rebuilding and tuning the engine to make it operational, replacement of several interior components that have degraded with time, and other restoration updates to make the Rally Z operational again. The project is expected to finish by December of this year.

The Z platform continues today, with the latest entry being the 370Z, introduced in 2008 as the sixth-generation of the sports car. May remember the early Datsun 270ZX (which replaced the 240Z) thanks to Paul Newman, who raced and did commercials for the car during his time on the Bob Sharp Racing team.