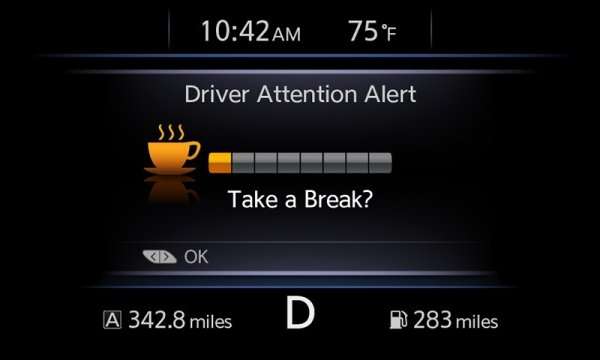 The 2015 Nissan Murano has a surprise system that many may not be aware of: Nissan's new Driver Attention Alert program meant to let drivers know when their attention is not on the road.
Advertisement

One of the leading causes of preventable automotive accidents is distracted driving. Although most of us think of "distracted driving" as using our mobile phones while we drive, that type of distraction accounts for only a small percentage of the overall distracted driving-caused accidents. Things like drowsy driving, daydreaming, looking away from the road (changing radio stations, taking care of kids in the back seat, etc), etc. are more common causes. According to AAA, one out of five fatal crashes involve drowsy driving, for example, in part because drowsy driving more often happens over longer distances and those longer distances are usually covered at high speeds on freeways and highways where fatalities are more likely.

To combat drowsy driving in particular, many aftermarket items have been created. Headsets that beep when the driver's head nods, in-vehicle camera systems that watch for signs of drowsiness, and more are all solutions that have been created by various companies for drowsy driving. Many states now include coffee and other pick-me-ups at highway rest stops and so forth.

Along these lines, Nissan has created a new safety feature for its vehicles. Now available in the 2015 Nissan Murano and soon to be available in the upcoming 2016 Nissan Maxima, the Driver Attention Alert system monitors driver behavior to learn how the driver normally pays attention and then uses data collected by the vehicle to determine if the driver is becoming drowsy or inattentive, sounding an alert when it seems so.

The system is visually seen by the driver as an "amber cup" that looks like a coffee cup on the center of the instrument panel when the DAA determines that the driver may be drowsy. An audible warning is also given, meant to wake up a dozing driver, if the driver seems to have become more than just inattentive. DAA works by monitoring driver behavior at the wheel, monitoring steering input patterns from a baseline of driving created by "watching" the driver's behavior at the wheel for a period beginning from the car's first acceleration forward on a trip. Using statistical analysis of steering behavior, the system then determines how attentive the driver is, continually changing its metrics and following guidelines it's established for inattentive or drowsy driving. Its internal logic works to determine if changes are due to climate, road conditions, and so forth.

April 6th is national Drowsy Driving Awareness Day and according to a AAA survey, 37 percent of drivers admit to having fallen asleep while driving during their lives and 11 percent admit to doing so in the past year. With systems like Nissan's new Driver Attention Alert, it's hoped that drowsy driving can be curbed.