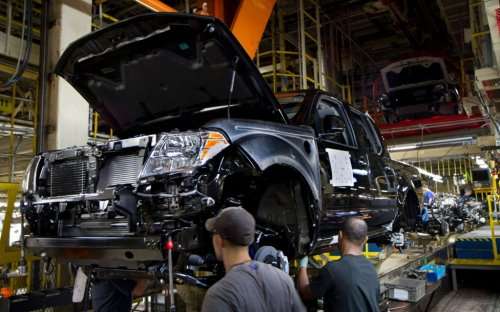 Nissan's Smyrna, Tennessee plant has seen its final Frontier truck model off the line and is now going all-unibody as the automaker moves its North American truck-based vehicle production entirely to its new facility in Canton, Mississippi.
Advertisement

The Smyrna plant is not closing, however, but is instead being focused on uni-body vehicles, including the company's popular cars like the Altima and Maxima. As Nissan's North American operations grow, the company has expanded to add the Mississippi-based plant and is now consolidating its diversity of American-made vehicles around its facilities to speed production and lower costs.

The change for the Smyrna plant will mean less down time for retooling and better use of materials and supply for both production facilities, which will lower costs and raise production capacities.

Smyrna will produce the Pathfinder, Rogue, Infiniti JX crossover, Altima, Maxima and Leaf - all uni-body vehicles in NIssan's lineup. Production capacity at Smyrna is now 550,000 vehicles and will produce most of the company's high-production models (namely the Altima and Rogue). The plant produced 348,676 vehicles through July of this year, about half of which (183,703) were Altimas and 34,996 of which were Frontier pickups. These numbers show that the plant was on its way towards hitting its production ceiling before the changes, making the move to diversify a good one. The company added a third shift at the Smyrna plant to increase production.

Canton is becoming the company's North American truck specialty facilitiy and will begin production of the 2013 Titan, Frontier, Armada SUV, NV vans, and Xterra SUV. The Canton facility has a 450,000 unit production capacity, but is not expected to reach that goal for a few years. It's highest-production vehicle will not be a truck, however, but will instead by the highly popular Sentra. Because of this, the Canton plant will also be capable of picking up extra production of the best-selling Altima to supplement Smyrna should the need arise.