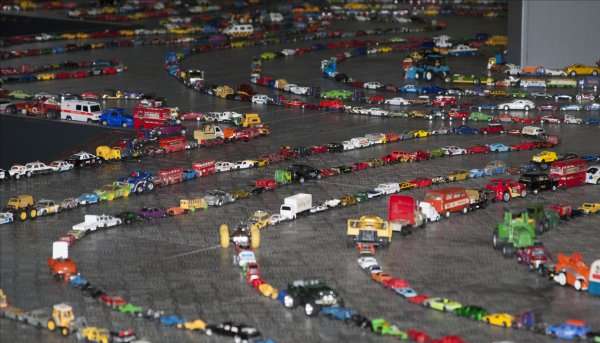 Ever wonder what it takes to get into the Guinness Book of World Records? Not much. Just a few more than 24,000 car models and space to line them up. A group of British volunteers did just that.
Advertisement

Of course, by "car models" we mean toy cars. The world record for the Longest Line of Toy Cars was set this holiday weekend by a group of volunteers in Britain, who snaked nearly two kilometers of cars around the building of the National Motor Museum in Beaulieu.

That trounced the previous Longest Line of Toys Cars record in the Guinness Book of World Records by nearly 10,000 cars. The old record was set in Germany at 14,310 cars, so obviously the Brits couldn't have any of that. Merely beating them wouldn't be enough. It had to be a proper thrashing. Wot wot.

The line-up of cars included little models that had been signed and donated by many celebrities, including Sir Stirling Moss with a model of his Mercedes-Benz 300 SLR which won the Mille Miglia in 1955. Pink Floyd drummer Nick Mason also donated cars, along with many others.

It required three hours for the official Guinness adjudicators to count the cars for verification. The line started in Jack Tucker's Garage inside the museum and snaked outside and around the grounds. According to Guinness rules, nothing but motor cars are allowed: no tanks, no boats, no RVs (er.. "caravans" in the UK) or trains could be included.

The record-setting event was held as part of the museum's year-long display For Britain and For the Hell of It - The Story of Land Speed Records. The record-breaking toy in the lineup (toy number 14,311) was a model of the Bloodhound SSC, which is the next British Land Speed Record contender to try for the books.

The last cars in the museum's 1.91 kilometer line of toy cars were another Bloodhound SSC and a Thrust SSC, presented and signed by record breakers Wing Commander Andy Green OBE and Richard Noble OBE. Noble will be bringing the actual, full-sized Bloodhound SSC to the museum after today's attempt at the World Land Speed Record is complete.

The toy cars are now slated to be sold at the Spring Autojumble on May 17 and 18 to raise money for the Naomi House hospice, many of whom's caretakers and patients were on hand to help set up the cars for this event.