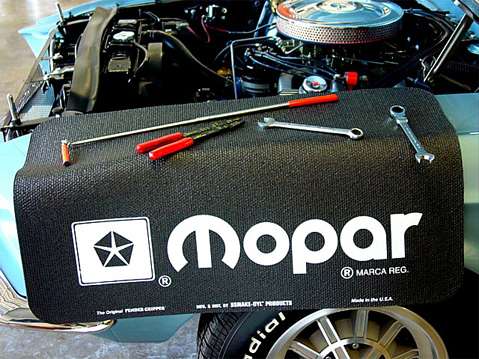 This month, the wrenchhead M celebrates 75 years in business as the Chrysler Group's parts and accessories brand of high-performance and muscle.

Mopar began in 1937 as an engine anti-freeze additive for the cooling system. Since then, it's grown into a company offering over half a million parts and accessories sold through fifty distribution centers and with race cars winning titles in several major racing leagues around the globe. In addition, there are over 400 Mopar Or No Car clubs around the world, where Chrysler enthusiasts have been beefing up their rides for decades.

MoPar started as a mashup of the wrods "motor" and "parts" during a meeting of Chrysler Parts Corporation's executive committee. It quickly evolved into the brand name for most Chrysler parts, becoming officially so in the 1960s with the formation of the Mopar Division. That quickly became the brand name of choice for speed and power enthusiasts, who used Mopar to add prestige and muscle to their vehicles. At the same time, Chrysler began advertising "package cars" that included Mopar upgrades, starting with the Dodge Dart and Plymouth Belvedere models. These were initially sold as race vehicles, but often bled into the street driving market.

Soon, the term "Mopar" became synonymous with "racing" for Chrysler fans and the company capitalized on this by offering more and more muscle and pony cars as Mopar derivatives in special edition packages. In 1970, cars like the Dodge Challenger R/T Mopar were introduced, solidifying the link between the name and the powerhouses it was associated with.

After-market parts for tuning and upgrading Chrysler vehicles of all types and stripes became big business for the Chrysler Group. Today, nearly everything customer service after purchase with Chrysler is handled through Mopar shops, sales divisions, and suppliers. It's become the go-to name for Chrysler owners everywhere.