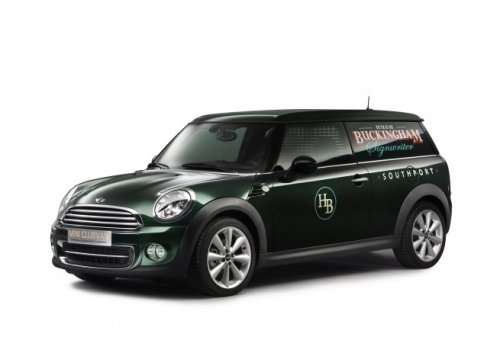 The Mini Clubvan is a personal-commercial hauler meant to showcase style in what is often otherwise a boring squared-off market segment. Of course, being from BMW, it is aimed at upscale use and will likely have a price tag to match.
Advertisement

In many parts of Europe where tax laws come down heavily on auto owners, especially those used in business, there are gray areas where smaller delivery vehicles slip through and are considered personal vehicles and thus exempted or have their burdens lowered. Many regionalized designs or modifications of vehicles have cropped up to fill this niche, but most are not exactly upscale. BMW's Mini wants to change that with this new Clubvan concept.

The press release for this early reveal of the concept, which will debut at the Geneva Motor Show in a couple of weeks, is full of hints of art galleries and boutiques using the Clubvan to deliver parcels or high class goods around town. This would hint at the prospective price tag for this new Mini, obviously.

Regardless, the Clubvan is a solid idea based on the company's popular Clubman series, that appears to have been pulled off well. It's basically a Mini Cooper stretched out an additional 10cm at the wheelbase and made into a small van, as shown, but with some task-specific refinements that are extraordinarily thoughtful.

The doors are extra-wide for easier access and to make repeatedly getting in and out of the van easy on the driver and passenger (it seats 2). The rear doors are swing open barn-style affairs that offer full 100% access to the cargo space in both width and height. The height of the new Mini puts the floor of that cargo area at about halfway between the knee and the waist on most people. Finally, a fifth door, on the right-hand side of the car, gives broader access to that side of the van.

The interior sees a lot of task-specific refinement as well. A load barrier blocks the rear from the front, with a chassis-mounted cage keeping items in the cargo bay from coming forward onto the driver. The rear load bay is flat at the floor and ceiling and slightly rounded on the sides. Integrated strap pins (6 in all) are recessed into the floor and ceiling to allow easy attachment of load straps and retainers to hold cargo of any size or dimension securely in place.

It's these changes that make the Clubvan superior to the less task-specific Clubman. Further delineating the two is the upper-class accoutrement sported in the Clubvan. To what BMW calls a "well-judged lifestyle focus" - meaning upscale.

The Mini Clubvan concept is clearly a market-focused vehicle that will do well if it does go to production. It will debut physically at the upcoming Geneva Auto Show.