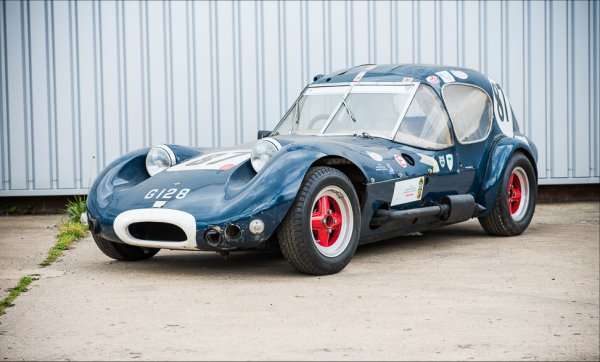 The first race car ever owned by Jackie Stewart will be auctioned in as-is, "barn find" condition later this month courtesy of Silverstone.
Advertisement

Back in 1960, Marcos built just nine of these cars for the 1960 race season. This one became the most famous thanks to then-rookie racer Jackie Stewart using it for a test drive and then racing it in the 1961 season, winning four sports car races as an amateur. Although Stewart moved on after that, the car remained in race stables through the 1960s as part of the Marcos team.

The car, of course, is a 1960 Marcos GT Xylon, which has been sitting in storage for some years. It was built as the first production racer in the Marcos lineup, a company founded by race driver Jem Marsh and engineer Frank Costin in 1959. In 1960, the car was offered to Barry Filer, a Scottish racing enthusiast, who had contracted the Stewart family to prepare and maintain his race stable. He invited the young Jackie Stewart to test the car with him at Oulton Park and eventually hired Stewart to race it that next season, starting the young man's legendary career.

The car has been in the ownership of Marcos Sportscars ever since, falling into the current owner's hands in the 1990s when he purcahsed the remains of the business and its holdings in Wiltshire. This will be the first time the car has been available for public purchase and it's expected to fetch in the 35-50 thousand Pound range ($60,000 to $85,700 USD).

The car itself is in "barn find" condition, requiring full restoration if it is to race. It will be offered by Silverstone Auctions at the upcoming Silverstone Classic on July 26-27.

Truly a beautiful piece of racing history and likely one of the only 1960 Marcos GT Xylons still in good condition. Originally, these cars had a unique four-panel windscreen and were nicknamed "The Ugly Duckling." They featured gullwing doors and a range of Ford engine options from 997cc to 1498cc in displacement, depending on the event to be raced. The first nine were of the design to be auctioned here and then the GT Xylon changed in 1961 under the Adams brothers, which became known as the Marcos Luton Gullwing and Spyder and then the Fastback GT. This car at auction was specifically made for the 750 Motor Club circuit.