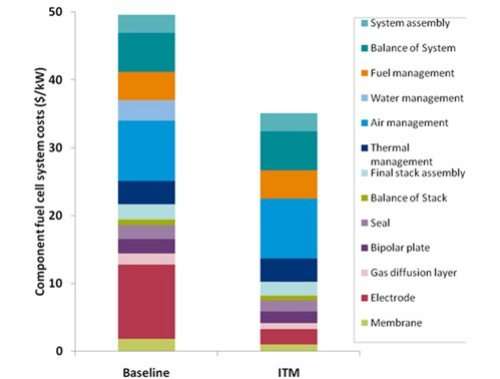 ITM Power getting close to affordable fuel cells for automotive

A cost analysis finds that the latest fuel cell membranes from ITM Power can reduce automotive fuel cell costs to $35 per kilowatt, a huge step towards the $30 goal the Department of Energy has given.
Advertisement

The U.S. Department of Energy has targeted a $30/kW goal for automotive fuel cell costs in order to make them market viable. The United Kingdom's Carbon Trust has targeted $36/kW as the goal. In their analysis of ITM Power's new membrane technology, the Carbon Trust finds that they put fuel cells at about $35/kW, which is beneath the UK's goal and much closer to the DOE's target.

The UK Carbon Trust says that any fuel cell cost of less than $36/kW would make a fuel cell cost-competitive with internal combustion engines at mass production levels. The DOE says that in the North American market, that target is $30/kW at 500,000 units or more per year production. Average 2011 fuel cell costs were about $49/kW, so ITM's cut to only $35 is a huge step forward.

Of course, these numbers from the Carbon Trust for ITM Power's cells are preliminary and have yet to undergo further independent verification, though the Carbon Trust is a governmental third party supporting several hydrogen fuel cell projects in the UK.

For its part, ITM Power is aiming to put its new technology in the second-generation hydrogen fuel cell cars that will be launched in 2017-2018 - most major auto manufacturers plan to have a first-generation HFCV by 2015, with Hyundai launching theirs next year. ITM is continuing research to further reduce membrane and catalyst costs as well as begin durability assessments under automotive operating conditions.

Although hydrogen fuel cells have many obstacles to overcome in order to be cost-competitive against current internal combustion technologies, they are seen as a viable, lighter weight, quickly recharged alternative to battery electrics and ICE-based hybrids by many in the industry. The technologies being developed by ITM Power and others may be ported to other fuel cell types as well, given time. Hydrogen fuel cells use a catalyst over which hydrogen (H2) and oxygen (usually from ambient air) are passed, causing the two to combine into water (H2O), giving off an electron in the process. This pure water is the only emission the HFCV has at the tailpipe. Like them or not, hydrogen fuel cells are under development by every major automaker on the globe.