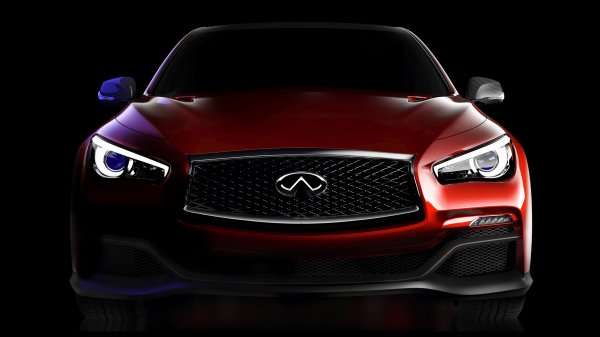 When the North American International Auto Show opens in Detroit, Infiniti will reveal a new concept based on the popular Q50 sports sedan and based on Formula One inspiration. Will this be Infinit's version of a NISMO car?
Advertisement

When the NAIAS show opens in Detroit early next year, Infiniti will present a new vision for a performance version of the Q50 sedan. It will be, the company says, a "vision of a high performance variant of Q50."

The premium brand's racing team, Infiniti Red Bull Racing, has been taking championships and building a name for itself as a team to contend with on the circuit. The new car will be called the Q50 Eau Rouge, named after a corner of the Spa-Francorchamps course that is legendary among Formula One drivers as a formidable obstacle requiring strength and commitment to make. It is one of the places on the F1 circuit where great feats and epic winning moves have occurred.

The Infiniti Q50 Eau Rogue "features aerodynamic styling treatments and design elements which are influenced by" the company's Formula One racing success.

So, this creates a question: does Nissan's premium brand plan to create its own NISMO spinoff? Could this concept be the first step towards an Infiniti Formula One or similar sports brand strategy for the company? Perhaps the term "Eau Rouge" is their moniker for the brand, if there is one?

We can't answer these questions yet, but it would be compelling to see a premium luxury carmaker like Infiniti jump into the sports car factory tuning arena, especially given the power and finesse of their vehicles. After a week in the Infiniti Q60 coupe, I was quite satisfied that it's one of the best all-around sport coupes you can purchase today.

The Q50 and Q60 are up for a redesign soon as well. Thus it's possible that rather than going to a premium sport badge, Infiniti is merely gearing up for a 2015 model year upgrade to the sport sedan and coupe.