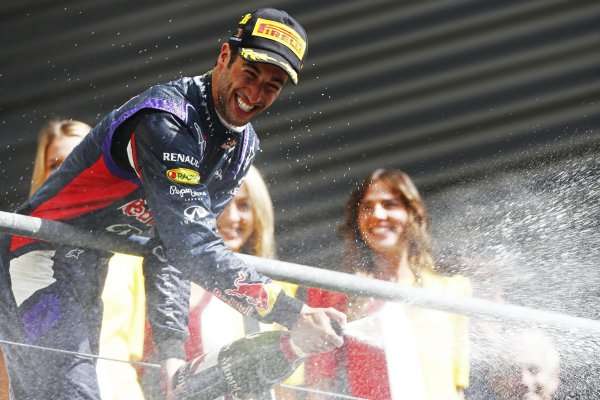 The Spa-Francorchamps race in Belgium this weekend was another exciting Formula One grand prix in which Infiniti Red Bull Racing took first and fifth.
Advertisement

This weekend, Daniel Ricciardo became the first Australian race driver to take the grand prix at Belgium on the Spa-Francorchamps since 1960 and scored the Infiniti Red Bull team their 50th grand prix win in history.

Fellow driver Sebastian Vettel, three time world champion, pulled one out from under his aero wing to squeak past McLaren's Jenson Button and Kevin Magnussen as well as Ferrari's Fernando Alonso in the final three laps, taking fifth.

The real story, though, was Ricciardo with his storybook grand prix to win. His finish was solidified in the first few laps, with superb driving using the bad start of the pole position racer, Nico Rosberg, who lost his position quickly as several veterans sped around him on the La Source curve. Daniel started fifth and went wheel-to-wheel with Ferrari's Alonso for several turns before passing him for good on lap four in Les Combes.

Up front, however, there was plenty of drama as then-race leaders Vettel and Lewis Hamilton, championship leader, went back and forth before Vettel out-braked and fell to third. In the next lap, though, teammates Rosberg and Hamilton tried to vie each other for the lead and connected, with Rosberg taking front wing damage and Hamilton sustaining a puncture. Rosberg held the lead as best he could, but Hamilton was done as he limped into the pits for a change that put him far back in the rank and file.

Over the race, however, Rosberg eventually lost enough ground that he too entered the pits and retired from the race. By lap eight, Ricciardo was in the lead.Mercedes had no way of catching up, making more mistakes with tires as the race ensued, and it was clearly Ricciardo's win by mid-race.

With consistent professionalism, the young Infiniti racer held his lead for the remainder, taking the checkered flag with three seconds over the second placer. Another beautiful F1 at Spa.