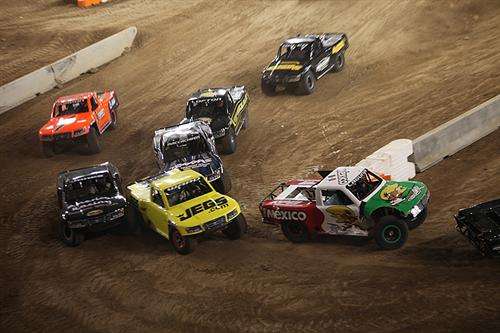 The first-ever Stadium SUPER Trucks races took place in the University of Phoenix Stadium with fast-paced, high-flying rally action. Events are planned around the nation in this exciting new race venue. Race results are..
Advertisement

With four different racing divisions on a rally course made up of straights, hard curves, high jumps, moguls and more, the first of many Stadium SUPER Trucks races for the season was underway in Phoenix, Arizona.

The first checkered flag went to Rob MacCachren in the #21 Traxxas truck, who was harried by both SPEED Energy trucks during the route before taking the win.

The highlight of the show, however, was the 18-lap Stadium SUPER Trucks final. After losing his early lead to the Mexican off-road driven by Lalo Laguna, Justin Mattney managed to retake his position when Laguna's #17 Visit Mexico truck lost control to get stuck in the outside water barrier. That lead was short-lived, though, as the fast-moving #21 Traxxas (MacCachren) jumped from sixth to third in only one lap and, after a re-start due to a wreck, MacCachren moved into first on the fourth lap.

For racer Justin Lofton, things couldn't have gone worse. The California racer was the Quick Qualifier, but had the wreck in the third lap after making contact with the #47 Traxxas truck driven by Mike Jenkins. The rollover resulted in a race re-set and Lofton was back in the game. On the tenth lap, however, things weren't looking good as he'd lost much of his momentum. Things went from bad to worse when his #6 Imperial Valley Full Plate truck sprouted flames under the hood, ending his race for the night.

With MacCachren in a solid lead, the race boiled down to second place shootouts. This competition lead to more wrecks. Jones, racing on his home turf, gave everything to try to get past Matney in the final corners, flipping his truck in the process, giving third place to Robby Gordon.

Other great races included the SUPER Buggy feature, won by Eddie Tafoya who overcame a broken suspension (left-front) for the flag. The race was punctuated by spinouts and spinning turns with the lead coming down to Tafoya and Larry Foddrill, who lost control towards the last laps and went into the water.

The Monster Truck division featured some hardcore air time by some of the biggest blasters in the business. The eventual winner in that epic category was Darren Migues in the Bounty Hunter who was closely contended by Larry Swim in the SPEED Energy Bigfoot. The Trophy Kart divisions also saw excellent competition with Myles Cheek eventually coming out on top.

The next event is April 27 in Los Angeles, California at the Memorial Coliseum with all four divisions racing. Other upcoming venues include San Diego, St. Louis, Chicago, Atlanta, Dallas, Minneapolis, and finals in Las Vegas.