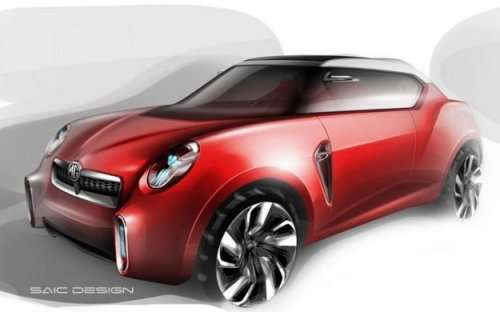 The legendary British automaker has been revived from the dead by new owners in China and now has an unusual concept to herald its comeback.
Advertisement

When the British carmaker of legend MG went under, most thought all was lost, but Chinese firm SAIC resuscitated the brand in 2005 and now plans a rise from the ashes at this year's 2012 Beijing Motor Show.

The all-new MG Icon will unveil there and, as these preview conceptuals show, it's anything but business as usual at the legendary sports car maker. While the MGB and the TC might be long gone, this new concept shows that they aren't forgotten. Design cues in the Icon show a retro throwback while modern touches and a foray into the compact SUV market show a forward look.

From the rear, the Icon concept is all MG with retro taillights, fender bumps, and a sloping hatch. The wide, muscular stance of the rear end hints at overall power on the road. From the front view, however, things are a little less sure.

The hood line and rounded, Cooper-like headlights flow on shoulder-like fenders to the roofline, which looks much like the Nissan Juke. The bumperless front fenders with their huge, lighted protuberances, however, are completely out of place on what is otherwise a nice modern blending of retro chic. The small grille and behind-fender intakes beg for retro-modern styling, but the huge protruding lights on the bumper ruin the look and make the rendering more comic-bookish than stylish. In fact, they turn this otherwise great design into something out of Disney's Cars.

Under the hood is a 1.5-liter, four cylinder engine putting out 135 horsepower and 148 pound-feet of torque. Most vehicles in this segment hover in the 180hp range, so this may be an underpowered competitor. Its wide stance and low profile, however, hint at great handling and fun cornering, something it will have to possess if it's to live up to the MG name.

Will the Icon concept see production? A fair question and one that won't be answered until Beijing or beyond. Current vehicles being put out under the MG nameplate include such uninspired yawn-inducers as the MG3, whose machine-gun name belies its ultra-compact hatchback boredom. If SAIC plans to keep the MG plate running as anything more than a last gasp attempt to milk the moniker for all it's worth, then something like the Icon will have to hit and hit big.

Toyota's First EV Will Have a Name of BZ: Toyota BZ
First Videos From Inside The Boring Company's Las Vegas Loop
END_OF_DOCUMENT_TOKEN_TO_BE_REPLACED