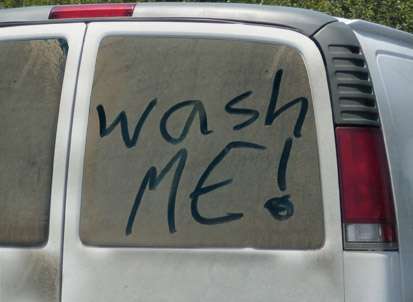 The hunt is on for the dirtiest car in America

Got a dirty car? Filthy, wild, and unabashed? Think your car is the dirtiest in the land? Want to win? Then tweet your voyeur shots of that nasty, dirty car and see if it has got what it takes to be called "The Dirtiest Car in America."
Advertisement

CARSTAR Auto Body Repair is looking for the dirtiest cars in America during the CARSTAR Dirtiest Car Contest. The event is part of the annual Soaps It Up! North American Car Wash. If you think your car qualifies as one of the filthiest, dirtiest, mangiest, nastiest rides around.. well, before you get to the clinic for that shot, take a photo and tweet it to @CARSTARAutoBody using the hash tag #SoapsItUp and you could win!

Two winners will receive a free car detail at any local CARSTAR location from around the nation. The contest is open to anyone over 18 living in the U.S. and ends at midnight Eastern time on July 20, 2012.

The Dirtiest Car Contest is part of the Soaps It Up! Car Wash that takes place at all CARSTAR locations in the United States and Canada. This year's was on Saturday (June 9), kicking off this contest. Volunteers at car wash locations in North America washed cars to raise money for the Make-a-Wish Foundation. Last year, they washed over 4,300 vehicles and raised over $30,000 for Make-a-Wish. This year, while numbers aren't in yet, they expect to have beaten those records and perhaps beaten their own Guinness World Record for most cars washed in multiple locations during an 8 hour period.

With more than 400 locations in 31 states and 10 Canadian provinces, CARSTAR has plenty of places to take your car if you win the title of Dirtiest Car.

I don't know about you, but I know that just parking a car in the driveway or in front of my house for a few hours is a guarantee of rain, snow, or a passing dust storm. Odds of this double if the car has been freshly washed and triple if it was washed at a paid car wash rather than on the lawn. In fact, I've often remarked that if we could control what type of weather response we got, I could hire myself out to farmers to guarantee them rain. Wash my car, park it on your field, instant showers.

If your car is like mine, then snap a photo and send it to @CARSTARAutoBody using the tag #SoapsItUp and see if you can win a detail service. Contest rules and other information is available at carstar.com.