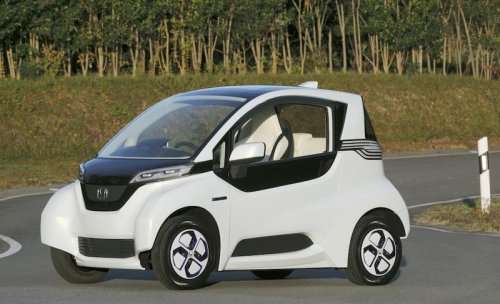 Honda Motor has revealed a micro car meant as a short-distance commuter platform meant primarily for city and off-highway driving with a relatively short range and fast charging time.
Advertisement

Honda has unveiled a platform prototype they're called the Micro Commuter Prototype. As a short-distance electric commuter, the car is a part of the Ministry of Land, Infrastructure, Transport and Tourism in Japan's initiative for micro-mobility products and fits the requirements for an L7 category vehicle in Europe. It is built do be semi-modular so that differing body options can be used to make the vehicle fit the need.

The MLITT initiative in Japan is meant to encourage near-future ideas for eco-friendly transportation in and around Japan's large cities and urban environments in ways that relieve congestion and parking problems. The European L7 category is a class of vehicle called "quadricycle" - 4-wheeled motorcycle - that must weigh under 400 kilograms (not including the battery) if it is an electric.

The Micro Commuter Prototype has a top speed of about 50 miles per hour, a maximum range of about 37 miles, and an output of 15kW (another L7 limitation) with a charge time of only 3 hours.

The platform itself is based on the 2011 Tokyo Motor Show prototype called the Micro Commuter Concept, which sat one driver and two children. Building on that, Honda hopes to make this version more versatile by adding modular options for the vehicle body and cabin to allow options for two adults, for package delivery, commuting, car sharing, and so forth.

Real-world demonstration testing for the Micro Commuter Prototype will begin next year in Japan in various scenarios meant to trial the various options Honda hopes to develop for the vehicle's Variable Design Platform (VDP). They have no said when or if the vehicle would go to market upon successful test completion.

The VDP positions the battery, motor, control unit, etc. under the floor and in the rear of the vehicle so that the front portion (passenger compartment) can be modular for easy assembly in various configurations at the factory. A tablet device, owned by the driver and capable of being used in multiple vehicles, allows the car's options (battery level, charging time/schedule, audio, backup camera display, etc) to be controlled and for car sharing applications both in fleets and publicly. A small solar panel on the rooftop can charge the tablet's battery.

The car will also be compatible with the ongoing tests for the Honda Smart Home System (HSHS) as part of Honda's overall system for optimized energy management in everyday life.

LG's New EV Battery Plant Is a Welcome News for Tesla
Tesla Giga Berlin's New Hurdle: It's Not Only the Gov't, but Now Tesla Itself
END_OF_DOCUMENT_TOKEN_TO_BE_REPLACED