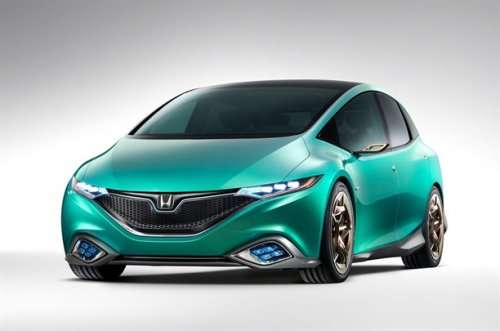 The new Honda C and Honda S concepts debuted at the Beijing Auto Show with promises of the S going global as direct competition for the Toyota Prius v hybrid hatchback.
Advertisement

The 2012 Beijing Auto Show is where most automakers show off their latest concepts and designs meant for emerging markets in Asia and surrounds. This unveil from Honda is a little different, with only one of the two cars being introduced to be aimed only at the Chinese market. The other will go global, so we may see it here in North America soon.

The Honda C is a concept meant for the Chinese market, the world's fastest-growing automotive market and one which every major player in the game is digging to get a foothold in. Honda hopes that the Chinese-only C will be the car to do that for them. It's a sleek, dragon-inspired sedan like every other debut in Beijing this year. Note that past years have not showcased "rat-inspired" or "rabbit-inspired" designs.

The C is a highly-styled sedan with Honda's usual low profile and ground-hugging design. Looking like a more muscular Accord, the C seems to lean forward as if to say "GO!" Its body lines follow this theme of speed and power and the sure-to-be-replaced razor-thin side mirrors tell the driver not to bother to look back at those losing the race.

Honda has not released a lot of detail for the drive train on this car yet, but it will likely be a 4-cylinder engine coupled to a 5-speed transmission.

The Honda S concept is very compelling as it will enter the global market, beginning with emerging markets like China, and will almost assuredly come to North America to compete with the Prius v. As that statement implies, the five door hatchback will be a hybrid with a larger, roomier size to accommodate more passengers and versatility.

As a "tall hatchback," the S has an inspired design with a front grille that seems to smile broadly at the viewer with grille-toothed joy. The long hood and windshield make the car look shorter than it really is in a design that seems inspired by Mazda. The overall body shape is a jelly bean like the Prius v and its market position would be the same, putting it as the next step up from Honda's Insight Hybrid.

Outside of it being a hybrid, though, Honda remained tight-lipped about power train specifics. Honda has previously promised a next-generation hybrid system for the Insight and it could be assumed that this would also appear in the S.

If the S comes to the States, it would not likely be until 2014 or 2015 at earliest. It is more likely that it will compete with the Prius v in Asia and Europe first, though if Toyota's v continues doing well here, that might change.

Toyota's First EV Will Have a Name of BZ: Toyota BZ
First Videos From Inside The Boring Company's Las Vegas Loop
END_OF_DOCUMENT_TOKEN_TO_BE_REPLACED