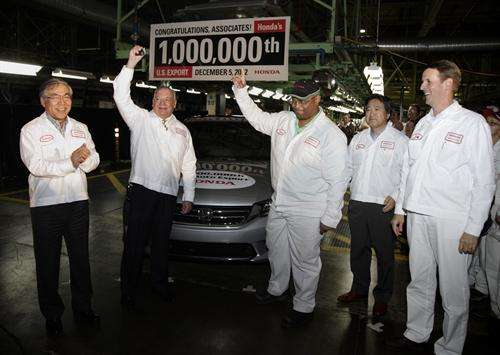 Honda has built its one millionth vehicle for export from the United States and will be a net exporter from North America in the next two years. How's that for "Made in America?"
Advertisement

Honda has been building vehicles in the U.S. for a very long time - just over 30 years - and with the company's twenty-fifth anniversary building cars in America to ship overseas comes another milestone: their one millionth export from the States. The silver 2013 Honda Accord EX-L Sedan seen here rolling off the line in Marysville, Ohio, will be shipped to South Korea and is the millionth vehicle to leave our shores bearing the Honda emblem.

What's more, Honda says that within the next two years, they will be exporting more cars from the U.S. than they're importing from Japan, which will make them the first non-Detroit company of size to do so. Honda has been increasing capacities at it's U.S.-based plants to take on more of the company's global production for several years and for many strategic reasons.

When Honda began exporting back in 1987, the vehicles being sent were just a handful compared to what was being built in Japan, but were, ironically, mostly exported from the U.S. to Japan and Taiwan. Since then, the number of production plants, local parts sources, and American jobs have increased as the company expanded. Since it began exporting in 1987, the company has sent more than $22 billion worth of automobiles and components out of the U.S. to other countries. In fact, many of Honda's cars that are assembled or manufactured in overseas locations now use parts sourced from U.S.-based suppliers.

The Accord EX-L shown here will leave Ohio and travel across the Eastern U.S. to Port Hueneme in South Carolina, where it will get on a boat and cross the ocean to Seoul, South Korea to wind up in a dealership for sale to a lucky Korean buyer. Honda currently exports U.S.-made vehicles to more than 40 countries, not including Canada, with exports this year to reach nearly 100,000 total vehicles this year alone.

Honda exports from seven U.S. ports, located in California, Florida, Georgia, Maryland, and New Jersey. Honda has also exported more than 500,000 powersports units (ATVs, motorcycles, etc) from their Timmonsville, South Carolina plant to other countries since it began doing so in 1980. Power equipment such as lawnmowers, small engines, etc. from Honda's U.S. operations surpassed the 2 million unit mark this year since they began exporting from Swepsonville, North Carolina in 1984.

Kind of puts a new perspective on "American Made", doesn't it?