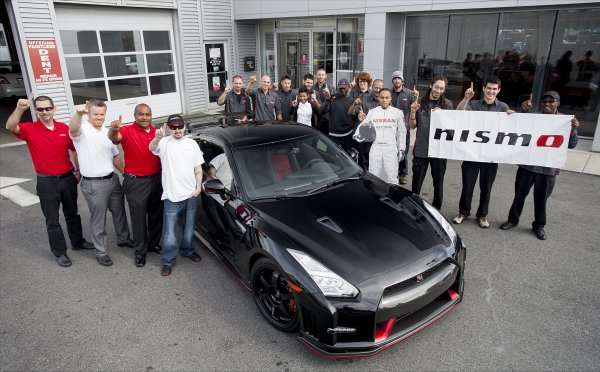 Matt McCulloh of North Carolina is the lucky buyer to get the first U.S. delivery of the 2015 Nissan GT-R NISMO. He opted for the black package. See the excited Matt on video as he gets in his car and starts it up.
Advertisement

When the first delivery of the 2015 Nissan GT-R NISMO was made, it wasn't just to anyone. The car went to Matt McCulloh of Winston-Salem, North Carolina who is not just a GT-R fan, but a three-time owner and the co-founder of NAGTROC, the North American GT-R Owners Club. If anyone deserved to be the first to receive the latest Godzilla, it's Matt.

To show their appreciation not only for his purchase, but for his enthusiasm for the car and his passion for the GT-R and NISMO brands, Nissan decided to do something extra-special for McCulloh. While he was at the dealership going through the final checklists to receive the 2015 GT-R NISMO, a team snuck into McCulloh's garage and gave it a NISMO makeover. When Matt returned with his new machine, he was greeted by the Nissan team and his made over GT-R space.

McCulloh, of course, plans to put in a lot of track time with his new 2015 GT-R NISMO. "This car to me is like a brute-force tool. To me it is so purpose-built that I am going to do a lot of track," he said. "I'm going to really use this car as far as track, autocross, a little drag-strip – so, you know, track and getting to spend some time in this great garage that I have here now."

"The GT-R NISMO has more than fulfilled my wildest expectations. Just looking at this car – it to me is the quintessential version of the GT-R that I have always longed for," said McCulloh. "It is an honor to have been along with the ride the entire way from having an '09, a '12. Having that history with the GT-R is going to allow me to have a deeper appreciation of this car. I can see where it started to where it is now."