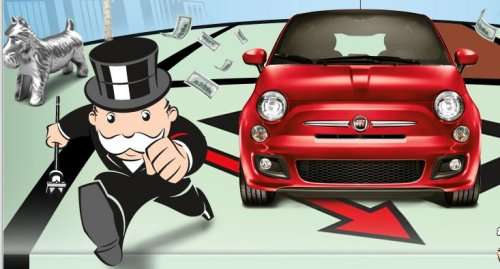 Fiat is playing Monopoly at McDonald's again this year. If you play, you could win a 2013 Fiat 500. Sorry, no beaver high hats included..
Advertisement

McDonald's holds its annual Monopoly-themed game every year at about this time. It's a game in which people can go to Mickey D's, buy a burger or meal (these terms are used loosely), and then pull off little labels on the fries and drinks and other non-edible, biodegradable containers and see if they've won stuff.

This year, lucky winners might receive a 2013 Fiat 500. There will be more than thirty of them given away, in fact, so your chances are actually pretty good. Well, by Powerball standards they are, I guess.

The game can be played both on- and offline.

In the real-world version, you have to go to a McDonald's restaurant and peel game pieces off of food containers. Preferably after buying the food, of course. In keeping with the Monopoly theme, you can collect property sets, instantly win stuff, and so on.

Online, players can go to PlayMcD.com and collect houses and hotels to try to win. Every hotel is an entry into the grand prize sweepstakes to get a Fiat 500.

As a side note, for those of you who eschewed practical language instruction and instead took Latin, you probably realize that Fiat means something other than "Italian car." Italians being Italians, though, they know exactly what it means. All they have to do is turn to any of the hundreds of thousands of Latin-speaking Catholics and ask. It basically means "Make it so." And you thought Picard was from France..

The Monopoly game at McDonald's is open to residents of the U.S. and Canada ages 13 and older, including territories such as Guam, Saipan and Puerto Rico.