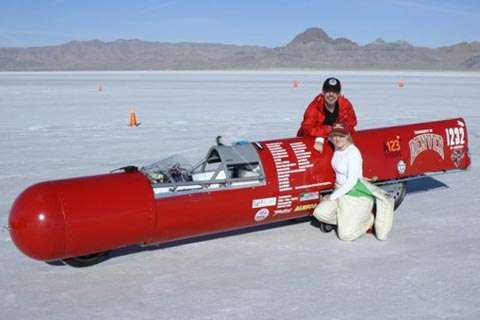 Eva, a University of Denver engineering graduate student, topped 216mph at the Bonneville Salt Flats in Utah in her all-electric streamliner motorcycle, the KillaJoule.
Advertisement

The KillaJoule is a home-built project now on its second year of racing at the Salt Flats. Eva built the motorcycle, with help from husband Bill Dube owner of the famous KillaCycle electric drag racing motorcycle. Eva's measured top speed at Bonneville at the BUB Motorcycle Speed Trials was 216.504 mph and the KillaJoule is awaiting certification for a 191.488 mph debut run last year.

The BUB races saw Eva piloting the streamliner through wins including the Fastest Sidecar Motorcycle Prize and the Female Rider Award. The current record for land speed in the sidecar motorcycle genre at Bonneville is 219mph, which Eva and her team believe the KillaJoule is built to beat. That record was set by an internal combustion engine motorcycle and if Eva were to beat it, it would be the first time an electric vehicle has broken an overall land speed record since 1899. To make that win, she'd have to make two total runs (a run in each direction, twice) with an average speed of at least 219mph, but with a top speed of 216mph this year, a marked improvement over the debut runs last year, she thinks it can be done - and soon.

The KillaJoule is powered by a 214 pound battery pack (375V, 1800amps) from A123 Systems, a permanent magnet AC motor from EVO Electric, and 250+ HP inverters from Rinehart Motion Systems. This package produces 250 horsepower, turning the rear wheel at incredible speeds.

As a "sidecar motorcycle," the KillaJoule has two wheels in-line (the rear being the thrust, front steering) and one offset for balance. The KillaJoule was designed by Eva and Bill using computer aided drafting (CAD) software and manufactured in their garage from tube framing and hand welds.

I was privileged enough to meet both Bill and Eva at their home near Denver, Colorado to see not only the famous KillaCycle, but also Eva's self-converted electric daily motorcycle the ElectriCat (which has climbed Pike's Peak), Bill's self-converted Volkswagen Golf, and the in-progress build of the KillaJoule after the framing had been completed. The KillaCycle team are great people and obviously love engineering electric vehicles. Both are also a part of Boulder Electric Vehicle, which builds an electric commercial delivery van.

Here is video of the KillaJoule hitting 213mph on a run at Bonneville: