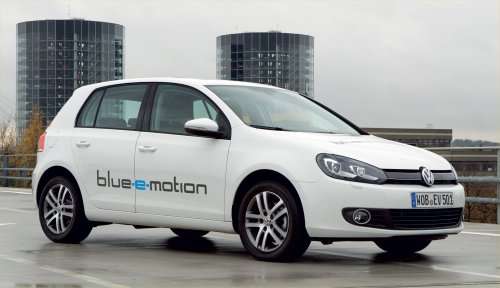 Electric VW Golf to glide in next year

Volkswagen has confirmed that the electric version of Europe's most popular car, the Golf Blue e-motion, will come to market late next year for both European and North American sales, becoming the latest in foot stomping electric glides coming to market soon.
Advertisement

Although Volkswagen has publicly stated that electrics are not the company's top priority, preferring instead to focus on clean diesel technologies, they have been slowly entering the EV game. VW aims to be the world's largest automaker and to do so, it has focused on vehicles that sell, predicting that electrics (pure and hybrids) will make up only 3% of the total auto market by 2018 - a prediction largely accepted by most in the industry. The addition of the Golf EV, however, shows that the company hasn't blown off electrification altogether. It will be the company's second current production electric, after the largely unsuccessful Touareg Hybrid SUV.

And what a vehicle to choose for their first battery electric entry. The Golf is Europe's best-selling vehicle by a very long way. Jato Dynamics says that the car sold 484,547 units last year in Europe alone. An electric version of the car has the potential for, at the very least, high visibility for Volkswagen and plug-ins in general.

The Golf Blue e-motion was originally slated to release in 2014, but that date has been pushed up to late 2013 - possibly as early as late summer or fall, according to an Associated Free Press report.

The prototype for the car (pictured above) has been making the auto show circuit since late 2010, including the North American International Auto Show (NAIAS) in Detroit this year as well as the Geneva Motor Show going on now. Currently, it's based on the Golf Mk VI platform, but will move to the Mk VII platform for its production. VW claims an 80 mile range for the car without sacrificing any cargo space from the petrol/gasoline and diesel versions of the Golf. This is not quite what Volkswagen claimed for the Golf electric when its prototype debuted, giving it 100 miles and saying that could increase if battery technology got better between then and its release - since that hasn't happened and reality has set in, VW appears to have lowered expectations instead.

The Golf Blue e-motion does bring some interesting flavor to the EV game, however. Selectable regenerative braking, for one, which allows the driver to choose between four levels from none at all to heavily engaged. These can be selected through the paddle shifters on the steering wheel. The car also features a 50-50 weight split, since the batteries are under the floor, a change from the gas/diesel version's front-heavy drive. Three drive modes, now becoming standard in electrics, are also available. VW's calling them "Normal, Comfort+ and Range+" - the names denote their uses.

Volkswagen is taking the long, steady approach to embracing new technologies, but has several hybrids coming to market in the next few years. The Golf Blue e-motion will debut at about the same time (perhaps slightly before) the UP! city car begins its electric dance.

Toyota's First EV Will Have a Name of BZ: Toyota BZ
First Videos From Inside The Boring Company's Las Vegas Loop
END_OF_DOCUMENT_TOKEN_TO_BE_REPLACED