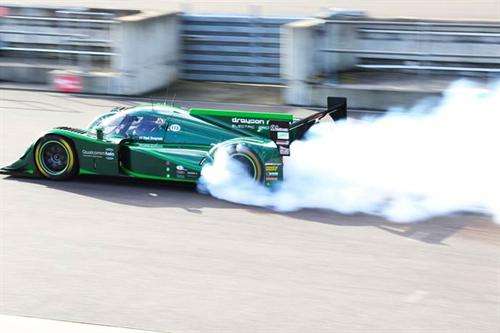 Drayson Racing Technologies plans to attempt a world land speed record for an electric vehicle next month in Britain, hoping to beat the current American record of 175 mph.
Advertisement

The FIA World Electric Land Speed Record is currently held by Battery Box General Electric in the United States and was set way back in 1974 at 175 miles per hour. For forty years, no one has been able to overcome the technical challenges of keeping an EV consistent and reliable at those speeds.

Lord Drayson, co-founder of Drayson Racing Technologies, wants to change that with his Drayson B12 69/EV formula race car.

“It is not the outright speed that is impressive about this record attempt, but the engineering challenge of accelerating a 1000kg electric vehicle to such a high speed and sustaining that speed over a measured mile, before stopping safely all within a relatively short distance then turning round and doing it again within an hour. It’s a tremendous technical challenge but we believe it’s about time someone moved this record on to demonstrate just how far EV technology has come.”

The attempt is being made in the sub-1,000kg class and the car will be driven by Lord Drayson, who races the electric LeMans Prototype regularly and has entered it into the upcoming FIA Formula E championship. The attempt will be made at Elvington's 1.86 mile runway in Britain.

The Drayson B12 is a Lola chassis car. The non-electric version races with a Judd V10 bio-fueled engine. The B12 69/EV, however, is an all-electric race car and the Drayson team is tuning it specifically to this record attempt, making it consistent with a low downforce circuit in order to maximize traction so it can achieve maximum speed quickly. The car puts out 640 kW (850 bhp) through four Axial Flux Motors (two on each rear wheel) and is powered by a 30 kWh battery pack encased in a carbon fiber shell that's been integrated into the Lola chassis as part of its structure. The battery is modular, so it can be swapped, expanded or contracted to fit the racing need for capacity, weight, etc. Uniquely, the Drayson EV uses a Qualco mmHalo wireless charging system.

“The reason we are doing this is to showcase the maximum level of EV performance at the moment - and in a real racing car rather than a teardrop-shaped land speed record car. We are also demonstrating the future potential of technologies like wireless charging in speeding the adoption of high performance EVs. It’s a great way to build up to the Formula E championship that we are competing in from 2014 and will demonstrate that Britain is at the forefront of this vital technology, which I believe represents the future of the automobile.”