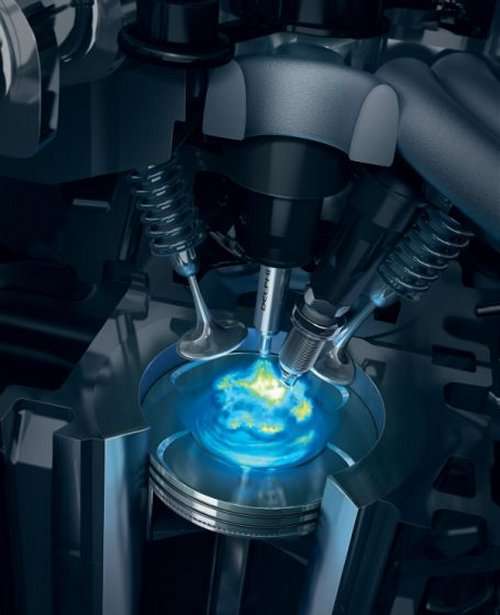 Delphi has a new gasoline engine that beats most hybrids

What if we could get all of the fuel economy benefits of a hybrid car, but without adding all of the complex (and expensive) hybrid components? Delphi has an engine that it says can do that.
Advertisement

Imagine combining the best attributes of gasoline and diesel engines into one system and reaping fuel economy numbers that rival today's gasoline-electric hybrids like the Toyota Prius. Engineers have been dreaming this dream for years, but have been stymied by the problems such engines have to overcome.

Delphi, a major parts supplier to manufactures, thinks it's figured it out. Using a single-cylinder test engine, the company put the technology to the test under a variety of conditions and found it performed better than expected. They're now building a multi-cylinder version that will be very much like the production-level engine in a car would be and will test that to be sure the idea scales up.

The engine is a combination of diesel and gasoline engine combustion technologies, combining the best of both to achieve fuel economies that are estimated to beat today's midsized sedan's averages by more than 50%, according to the company.

The gains come mainly from the higher energy efficiency of a diesel engine, which is 40-45% efficient in energy extraction and use while a gasoline engine is usually less than 30% efficient. Diesel engines, however, require a lot of after-treatment to meet emissions requirements while gasoline engines do not.

The idea, which engineers have tried to accomplish for years, is to burn gasoline in the same was you do diesel, gaining the efficiency of diesel use without requiring the after-treatment to clean it up. The problem has been controlling knock and noise in such engines, since igniting gasoline with pressure rather than spark (like diesel) is often met with burns that go too fast, especially under shifting loads such as idling, accelerating and cruising.

Delphi's solution is to time three bursts of gasoline into the chamber, which avoids a too-rapid burn while burning the fuel faster and more thoroughly than happens in conventional gasoline engines, in turn getting more from the fuel. The tech uses off-the-shelf items currently available on the market, making adoption potentially faster should the engine prove itself in trials.

Delphi calls this gasoline-direct-injection compression ignition. It includes other strategies like re-directing exhaust flow into the chamber to help warm it up in between firing to bring the engine to operating temperature faster when starting cold. Advanced air intake control also helps optimize the fuel:air mixture in the chamber during combustion, optimizing burn rates.

If Delphi's estimates are correct, then adding the weight and complexity of hybrid-electric systems may become obsolete.

Rob wrote on May 20, 2012 - 11:22pm Permalink
Why is it one or the other? Why can't an improved engine become the ICE components of an even more efficient hybrid?
Aaron Turpen wrote on May 21, 2012 - 5:05am Permalink
Guess you didn't bother reading. Hybrid = extra weight and complexity and cost.
Anonymous wrote on May 21, 2012 - 3:30pm Permalink
I DID read the article and think this could still be used in combination with hybrid technology to extend the fuel efficiency even higher. For instance, and excellent application would be a hybrid arrangement that would apply the electric drive as a booster to the ICE engine to reduce the load on the ICE engine during acceleration and startup, thus reducing emissions and consumption, then switch off when the engine is under a fairly stable load and operating at peak efficiency. Using such a combination would allow a high torque electric motor to bear the brunt of bring a loaded pickup up to speed, for instance, without sacrificing fuel economy. Or, this motor could be used as a range extender for a fully electric vehicle like the unit used on the Audi A1 Etron, a small unit to run a generator under a stead load while the actual propulsion is handled by an electric motor.
Chief Mechanic wrote on May 21, 2012 - 11:04am Permalink
Two things: Some hybrids (the ones that use the Power Split Device hybrid system) are actually mechanically SIMPLER than a normal car, not more complex. The Toyota Prius uses the PSD and it has all of 27 moving parts in its transmission, versus 100+ in a normal 6-speed automatic tranny. The complexity is in the control electronics, not in the mechanicals. There are also efforts to decrease the weight of a hybrid system by moving to lighter lithium-ion batteries (versus heavier NiMH which was the battery of choice for the early hybrids). And Toyota has been incrementally shrinking the size and weight of the traction motor-- The MG2 in the 3rd-generation Prius is about half the size of the one in the iconic 2nd-generation Prius. That said, I agree with Rob that the improvements made to a gasoline engine can be applied to a gas-electric hybrid to further improve fuel economy, since a gas-electric hybrid still has a gasoline engine aboard.
Robert Weekley wrote on May 21, 2012 - 2:06pm Permalink
When you consider the quoted problem: "especially under shifting loads such as idling, accelerating and cruising.", this makes sense to use this engine (If it in fact delivers the intended goods) - in a Serial Hybrid System - where it is not tied to the changing loads, but runs at peak efficiency, to re-charge the Battery pack Quickly and then shut off, and the Batteries and electric motor handle the shifting loads. Maybe this could be the solution to going to a hybrid MACK Truck and bumping the fuel efficiency from a few mpg up into the 10's or 20's!
Aaron Turpen wrote on May 21, 2012 - 3:47pm Permalink
The trouble will be output. A heavy Class 8 truck probably can't use an engine this size, even as a generator, realistically. Opposed pistons would have about the same efficiency and better power output plus be capable of being used directly in a parallel option.
Kizashi wrote on May 23, 2012 - 2:21pm Permalink
this is not new technology, Mazda already has it on their vehicles, its called Skyactive engines. Also Ford has it too, called Ecoboost.
Aaron Turpen wrote on May 24, 2012 - 2:16am Permalink
Umm.. .No. Both the SkyActive and the EcoBoost engines are based on standard compression rates for gasoline, not higher diesel rates as with this Delphi model. Ford defines EcoBoost as "gasoline turbocharged direct injection" (GTDi). Mazda's SkyActive is close, but it only increases pressure by about 15%, not by orders of magnitude as does this Delphi engine. Most of this engine's gains are in efficiency improvements in accessories and the transmission, not the engine itself.

LG's New EV Battery Plant Is a Welcome News for Tesla
Tesla Giga Berlin's New Hurdle: It's Not Only the Gov't, but Now Tesla Itself
END_OF_DOCUMENT_TOKEN_TO_BE_REPLACED