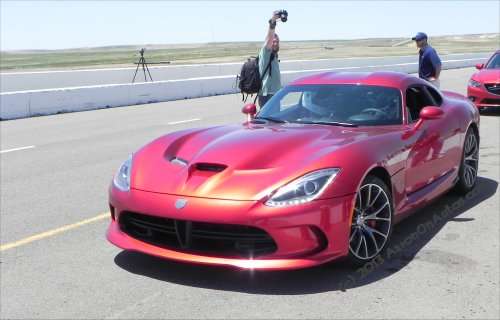 The RMDE is an event bringing automotive journalists from around the Rocky Mountain region together with manufacturers who are showing off their latest and greatest. Day 2 is a day on the race track, giving us wannabe race drivers a chance to pound around the GT corners and fly through the straightaways in some of the hottest sports cars on the road.
Advertisement

In day one of the Rocky Mountain Driving Experience, we took some excellent new cars into the beautiful mountains of Northern Colorado. On day two, we congregated at the High Plains Raceway near the Denver International Airport to sample some of the hottest cars on the road today (and tomorrow) on a GT track.

The track itself was reduced to about a two mile total circuit with five turns and a quarter mile straightaway. Two of the curves are a full 90-degrees, including the one coming off of the straight, while the others are softer, including the one going into the straight. Here are the cars driven on that track and my impressions of them from the experience. Remember, I am not a professional race driver and don't even pretend to be a competent one. There were a few semi-pros in attendance and I did talk with them about their impressions, but the below are entirely my own opinions on these cars.

A typical track run would be a first go-round in the "slow lane" to get a feel for the car and its capabilities, a second go-round "balls out" and a third go-round in the "slow lane" for a cool down. Most of the cars listed here were driven at least twice (six loops) with the exception of the Viper. Other cars driven were not "track cars" and so are not listed here, as impressions of a non-sport car on the track are out of context. My first car on the track was the 2013 Infiniti M Hybrid, which I chose specifically because it has power, but is not a track car and thus would force me to take it easy and re-familiarize with a track I had not driven on for almost a year.

2013 Camaro SS 1LE
The Chevrolet Camaro ceased to be a muscle car long ago. In the past couple of iterations, the Camaro has become a more sedate, easy-going car with most of its "track cred" being about nostalgia more than current reality. It's a sport sedan that is too large to corner well or hold its own against smaller sedans like the Genesis Coupe Track and is more on par with contemporaries like the Accord Sport.

2013 Dodge Charger Daytona
Like the Camaro, the Charger hasn't been a true muscle car for years. It is not really a sport sedan anymore either, having given up power and cornering in favor of a larger interior and cushier ride as a family sedan. Its power on the straightaway was respectable, but nowhere near the capabilities of the smaller, faster racers like the Focus ST.

2013 Viper SRT
Dodge was smart enough to bring a professional driver (Erich Heuschele of the SRT team) to drive us on the track rather than allow us to almost assuredly wreck this rare supercar. The Viper we were given is one of only 75 made in that specific paint scheme and for his part, Erich did his best to make us puke with his extreme cornering and ability to nearly break the sound barrier on the straight. This was easily the most fun I had all day, with the first lap being a "hang on to your lunch" run, the second being an informative "watch a pro do it right" and the third being a "let's save the brakes and drift every corner" whoop-inducing fun fest. We broke 200 mph on the straight with all three circuits.

2013 Fiat 500 Abarth Cabrio
My first couple of laps in this car told me that it was either really horrible, or I had no clue how to drive it. I pulled into the pits and said as much to Fiat's head of brand communications, an Italian amateur racer named Ariel Gavilan. He got into the car and I rode shotgun as he took me around the track and showed me that this tiny car requires a different tactic on the corners compared to the longer-wheelbase vehicles we were otherwise driving that day. The gist is simple: hit the corners later, don't be afraid to turn sharper, and don't worry about wheel drag because the wheelbase is too short for it to happen. Once that was clear, I had a blast in this little demon. While not the greatest race car on the track that day, it was definitely high on the list for fun factor.

2013 Ford Focus ST
This car has the look, the performance, and the "noise credibility" to make anyone in the Fast and Furious crowd happy. For the small price tag, it's an excellent amateur track driver's car and comfortable enough to be driven everyday, including having the versatility of being a five-door hatch. The seats are tight, the power is surprisingly good and the Focus ST emits a signature high-rev sound that couples with a turbo-jet sound from the turbos to match a mid-pitched exhaust note. My top speed in this car was 133 mph, which is very respectable.

2013 Honda Accord Sport
This car is comparable to the Camaro or the Charger. It's somewhat smaller and has less interior room, but is just as good or better on the race track. It's slower on the straightaway than the Camaro SS, but corners better than both the Camaro and the Charger. The reality is, though, like its American counterparts, this is not really a race car, but a sport sedan meant to give slightly more performance on the road and a tighter feel for the driver.

2013 Hyundai Genesis Coupe Track
The Genesis is a proven platform on the road and the Track version is competent on the circuit as well. The car handles well, picks up speed admirably, and is a strong contender to replace the American muscle cars that have gone to seed. Compared to the Focus ST and Subaru BRZ, it is a strong contender but is probably bested by both.

2014 Nissan GT-R Premium
One of the cars that everyone looked forward to, the GT-R did not disappoint. Although this car is very much hyped, it lives up to it and is easily the best amateur / semi-pro Japanese sports car you can buy. It features serious raw power, all-wheel drive stability on the track, and ridiculously fast shifting. It's definitely a supercar. My top speed of the day was in this car at 170 mph and others with more experience were in the 180s. Had this been the only car I could drive on the track that day, I would have been ecstatic. This is what Japanese supercars should all be.

2013 Subaru BRZ
Another of the cars we'd all looked forward to was this Toyobaru. It's comparable to the Focus ST on the track and where the Focus has more muscle, the BRZ has better cornering. Top speeds in the two were comparable, though the Focus beat the BRZ by about 2 mph. Had we been timing track runs, though, I suspect the BRZ would have been equal to the Ford overall. For an entry-level race car for amateurs, the BRZ is a good choice.